McKenzie asks them about the 20-woman Battle Royal for the number one contender for the NXT Women’s Championship. Jacy says, “there is no chance, it’s a certainty. And how fitting of a name that come Saturday, Feb 4th, it will be vengeance day for Toxic Attraction. Roxanne is going to pay for what she did to us.” Gigi says, “Everyone deals with pain differently, Jacy screams it out. I take it out. I will have 18 other women tonight to take it out on. In this Battle Royal you will witness two caged beasts finally become unshackled and let into the wild.” McKenzie asks how it’ll play out if they are the last two, Gigi replies, “Very simple. You will hear your winners, Toxic Attraction.”

I think it’s an interesting angle having a team win the Battle Royal as they do have to come face to face during the match at some point.

Sanga is backstage with Jinder Mahal, Valentina asks him what he’s doing, questioning his actions on the Creed brothers. He replies, “Yes, Valentina. It’s about me and my brothers.” Elektra replies to Valentina, “Sanga is all for himself, maybe it’s time for you to be all about you. Great time to start is tonight in the Battle Royal when it’s every woman for herself. Think about it.”

Due to this, I was wondering if perhaps Elektra and Valentina will team up sometime soon or Elektra will be encouraging Valentina to make some character changes. 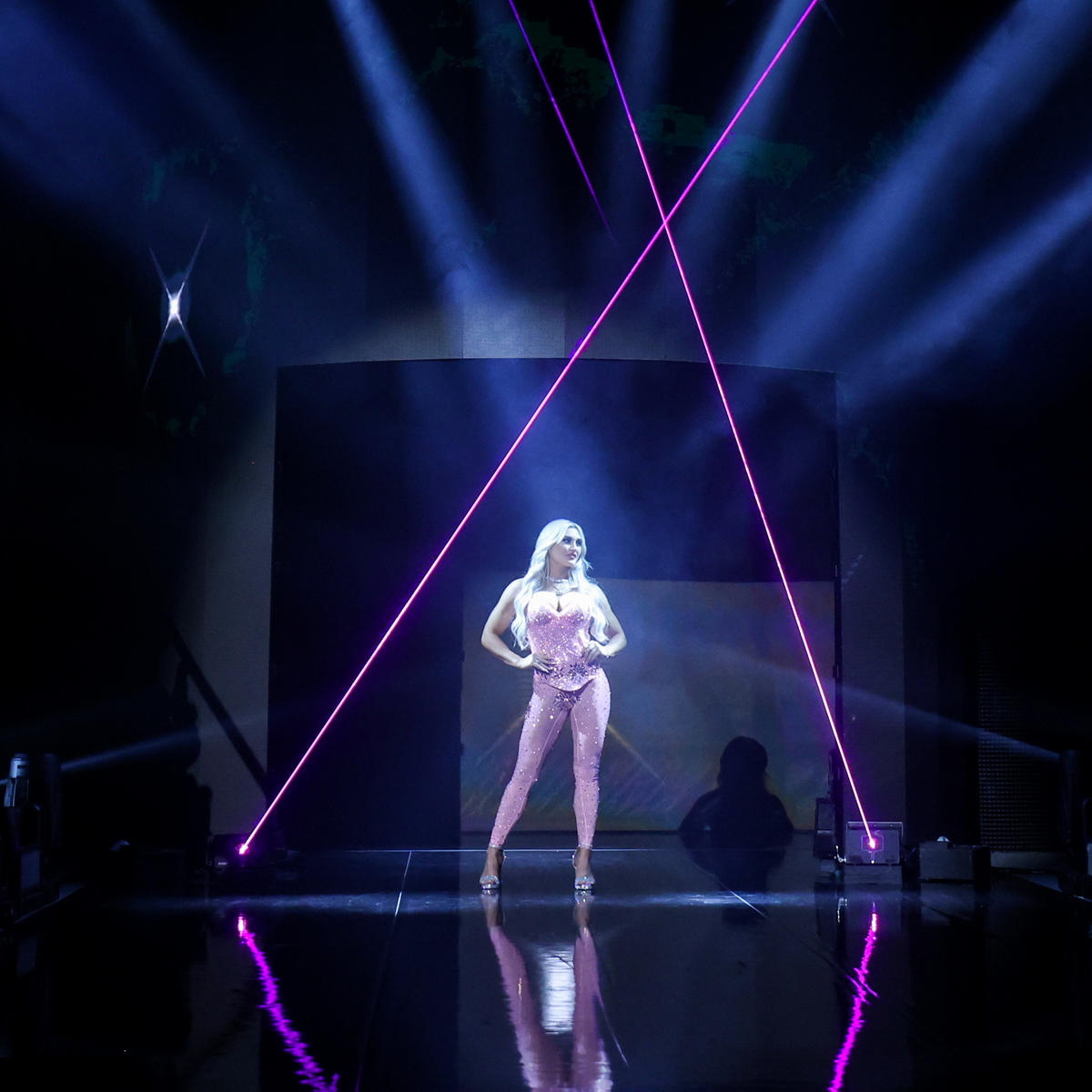 “I know you all totally probably missed me so much, it’s like not even funny. Every single woman in that locker room is sweating, like a disgusting pig because NXT’s biggest superstar is back. I can’t blame them for feeling so inferior, I’m a revelation. In my first nine months of being here, I picked up this business better than any woman ever has. And in the past five months, I have watched every single woman fail miserably at trying to replace me. No one has my shine, my skill or my style. Now in 2023 can officially begin because the center of the universe is back.”

I thought this would have been a great opportunity for Tiffany to declare she was entering the Battle Royal later on but having her saved from it, makes me wonder if she is being saved for some time later while getting built up as a contender.

McKenzie asks Roxanne about the number one contender, if she’s rooting for anyone in particular, Roxanne joked with her picking Cora Jade. “Honestly, anyone but Cora Jade, I would be okay with winning. All jokes aside, this opportunity is huge. NXT’s first stand alone Premium Live Event outside of this building in three years and this women’s roster is steep. I could see Indi winning, Zoey’s won a Battle Royal before. Alba Fyre seems to be back on track.”

McKenzie asks about Gigi and Jacy after they “swore revenge” on Roxanne. “They’re definitely threats, they dominated this tag team division for almost two years. 20 women, only one can win.”

I am glad Roxanne was asked about Toxic Attraction as it didn’t seem like they were being connected in any way, from the start of the show with Toxic Attraction’s interview and Roxanne, I should have seen it coming that they were both winning.

Sol is warming up backstage, she is interrupted by Alba Fyre saying, “I was thinking me and you never had that one on one match.” Sol replies, “I am so bummed about it but I get it.”

“I feel like at least I owe you the match and now that I’ve taken care of Isla…” Alba starts. Sol interrupts, “You don’t owe me anything, stuff happens and the Battle Royal is tonight…” Alba interrupts her, “Do you want the match? or not?” as she raises her voice, “I am giving you an opportunity here.” Sol confused answers, “Yeah, I’ll take you up on that match.” Alba says, “Good,” as she seems to be getting out of a trance, “I’m sorry, there is a lot going on right now. I’ll see you tonight and next week,” before she exits.

This part was interested as it seems Isla’s dark magic has had some effect on Alba causing her to lash out at Sol, perhaps we see from shades from this during their match next week.

Stevie is shown as she is streaming her video package, she calls herself the “data collector” and she will be “downloading you on everything that is the life of Stevie. I’ve been carried on a digital wave across the ocean so the world can experience me. And remember, I am always two levels above and two steps ahead.”

At first, it felt like a commercial, I didn’t think it was a vignette for Stevie, really glad they’re implementing more ladies to the roster.

Kiana asks them why would Gallus do this to them, Briggs replies, “Because they’re sons of bitches.” Jensen replies, “They’re pissed because of the Pub Rules match last September.” Fallon tells them they’ll take care of them but she has a Battle Royal to win, Jensen encourages Kiana to do the same.

It was quite interesting to see them paired up, Kiana with Jensen and it seems Fallon with Briggs. 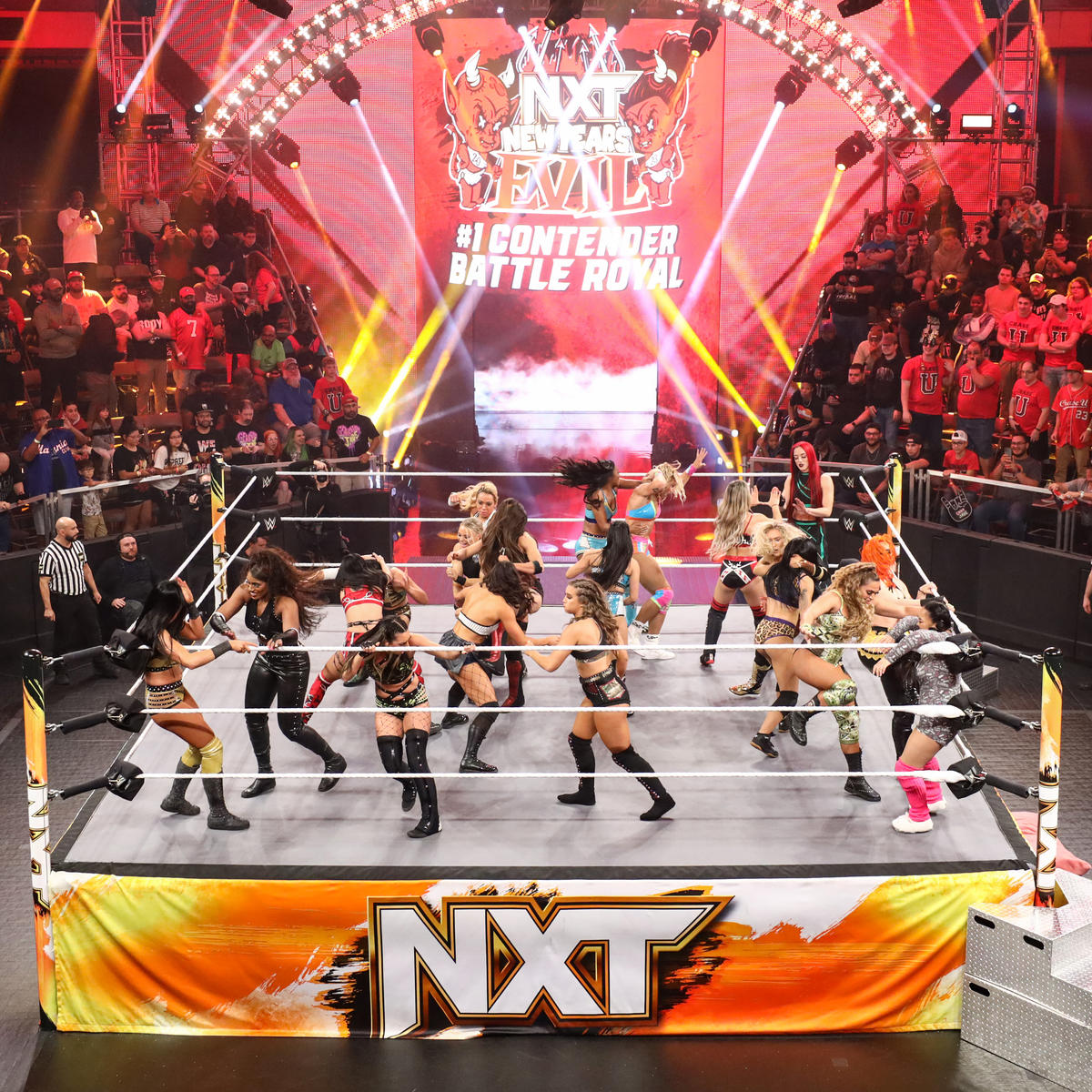 Cora focuses on Lyra Valkryia, Cora is eliminated in a few seconds. Kiana is taking on Tatum Paxley in a corner, pulling her towards the post until Tatum falls, causing her elimination. Elektra has Fallon’s leg wrapped on the bottom rope, Kiana pushes Elektra to assist Fallon to reenter the ring. Amari chops Lash Legend in the center of the ring, Lash grabs her by the throat to choke slam her to the outside. Jacy has pushes Sol Ruca over the top rope, she’s standing on the apron when Gigi arrives to sweep her off of her feet. Sol lands on her hand, doing a hand stand, wrapping her legs around the bottom rope until she’s able to reenter the ring. 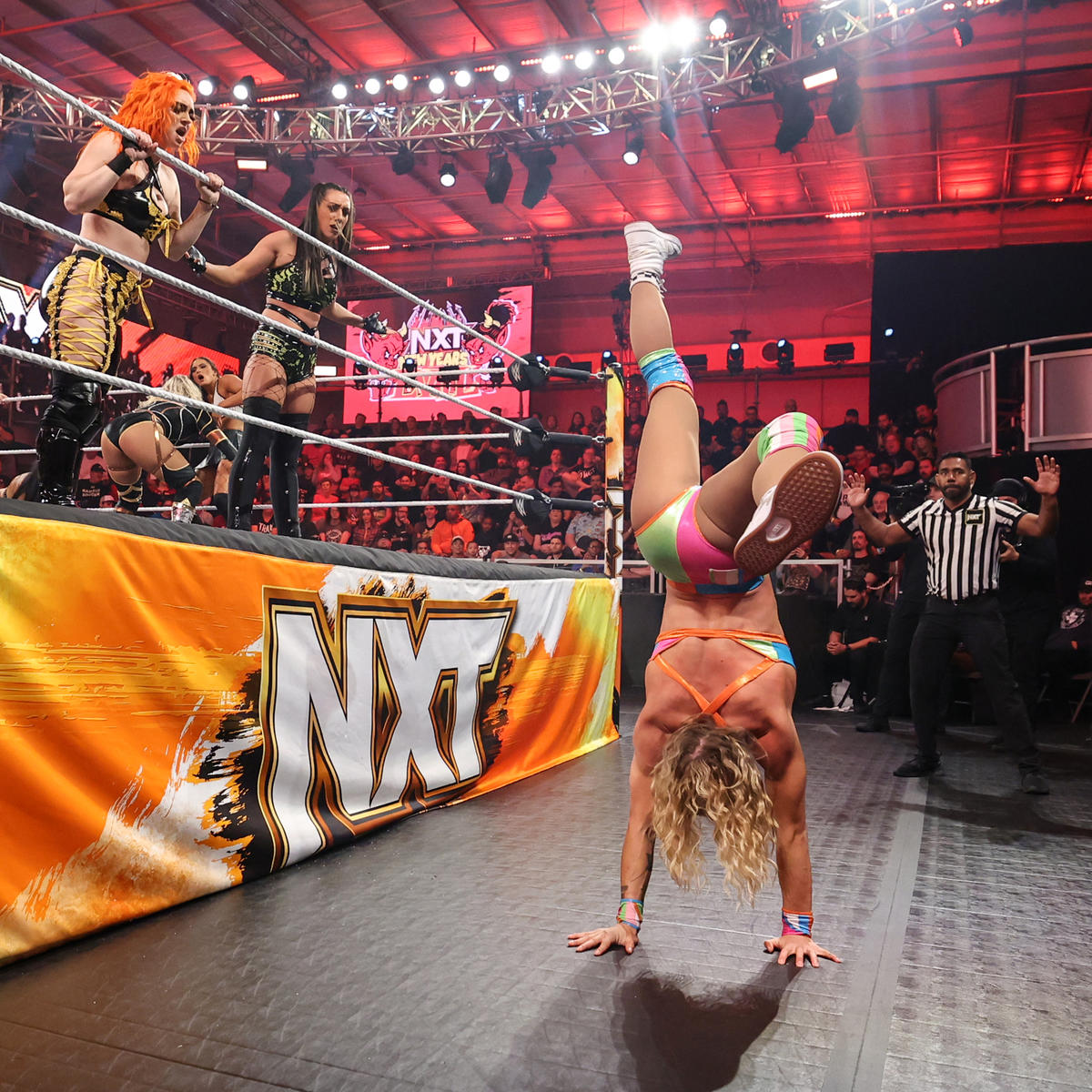 Thea Hail eliminates Valentina Feroz, Lash Legend is focusing on Dani Palmer. Lash picks her up, she’s sitting on Lash’s shoulders, fighting her way out, Indi pushes her, she lands on the bottom rope, Lash then goes towards Indi who pulls the top rope down, Lash jumps over it then lands on the apron, Indi is able to take her out, eliminating her.

Kiana is going against Lyra in a corner, Lyra holds on both side of the top rope as she jumps to wrap her legs around Kiana’s neck, pushing her out and over the top rope to eliminate her. Zoey has Dani Palmer lifted in the air, dropping her to land on Lash and Kiana outside. Zoey goes to clothesline Lyra who ducks it, Zoey goes to kick her but Lyra was holding on to Zoey’s leg, kicks her leg down then kicks Zoey, she is leaning on the top rope, Lyra goes to push her over but Zoey was still holding on. Cora reenters the ring to eliminate Lyra, she pulls the top rope down, Cora goes over it and is out of the ring again. 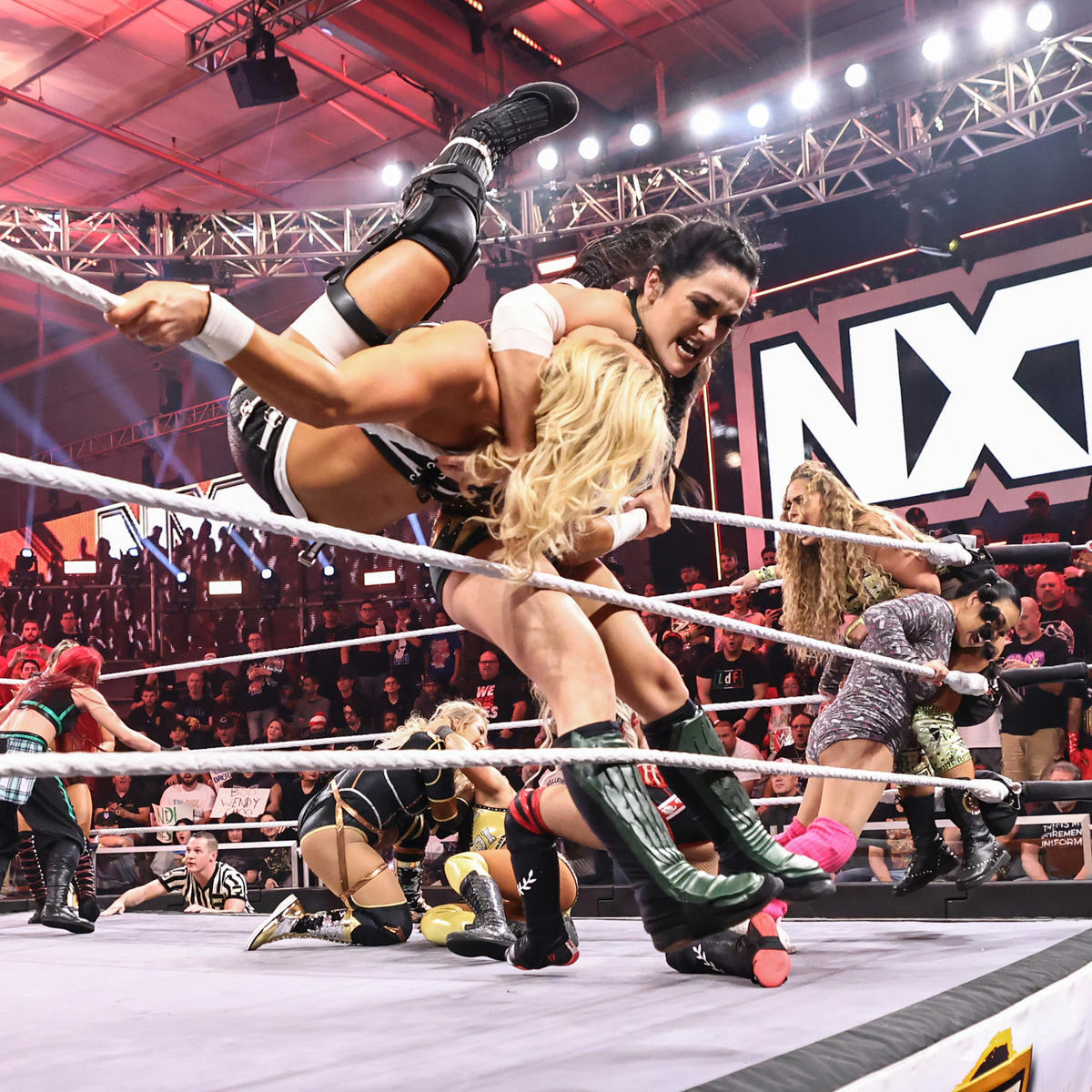 Gigi and Jacy double team to eliminate Indi, Nikkita has picked up Elektra, placing her on the apron, they have a back and forth, Elektra is attempting to reenter the ring, Nikkita kicks her, causing her to land outside. Wendy is holding on to the middle rope as Zoey is kicking her then she lands outside, however she landed on her pillow until Elektra arrived to remove the pillow to count Wendy’s elimination.

Nikkita is waiting for Zoey to turn, kicking her several times, she swings but her foot lands on the top rope, Zoey clotheslines her outside. Sol is shaking her head at Zoey, pulls her over the top rope to eliminate her right after Nikkita. 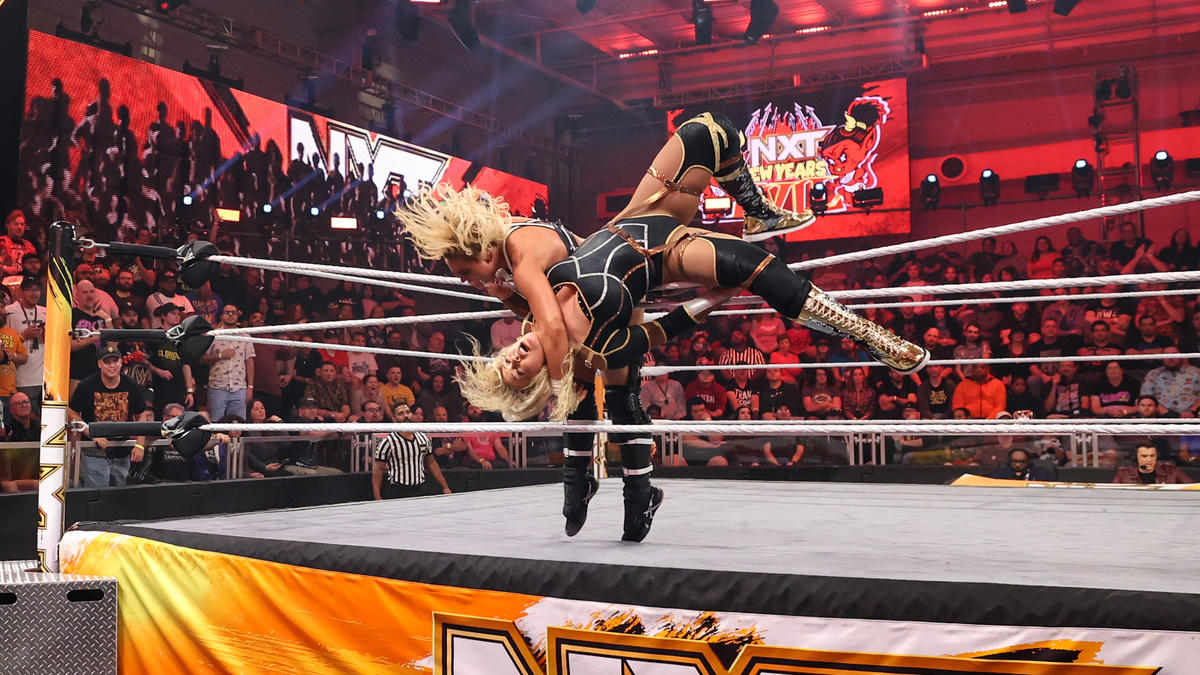 The remaining women are Sol Ruca, Gigi Dolin, Jacy Jayne, Alba Fyre and Lyra Valkyria. Jacy runs after Sol, she clotheslines Jacy then drop kicks Gigi. Alba kicks Sol’s midsection, Sol pulls her to a corner, is on her way to Alba with a cartwheel when Alba kicked her then pulls her over the top rope to eliminate her.

Lyra takes on Gigi, Alba takes on Jacy in front of one another, Jacy pulls Alba over the top, she’s able to reenter the ring, Gigi and Jacy team up on Lyra. Valkyria hits them with a double kick, goes for a kick combination on Jacy then a step up enziguiri to Gigi. Lyra wraps her legs around Alba’s neck, Lyra goes over the top as well, they’re both standing on the apron. Alba is wrapping her arms around Lyra, pulling her away from the ropes, Lyra is holding on to the top rope, Lyra elbows Alba causing her to let go. Gigi and Jacy run towards them but they’re able to reenter, Alba elbows Gigi and kicks Jacy. Lyra is able to wrap her legs around Alba’s neck to take her down, Alba is eliminated.

Cora comes from the crowd to go after Lyra as she is distracted, Gigi and Jacy push her, she falls outside as Cora is mocking her. Cora and Lyra are going at each other outside the ring, Gigi and Jacy are celebrating. Jacy turns to Gigi, she raises Gigi’s hand in victory, bowing in front of her, Jacy is climbing the ropes to eliminate herself when she turns to kick Gigi. Jacy goes to eliminate Gigi over the top rope, Gigi is hanging on by the apron, Jacy is pulling her hair, pushing her feet from the apron. 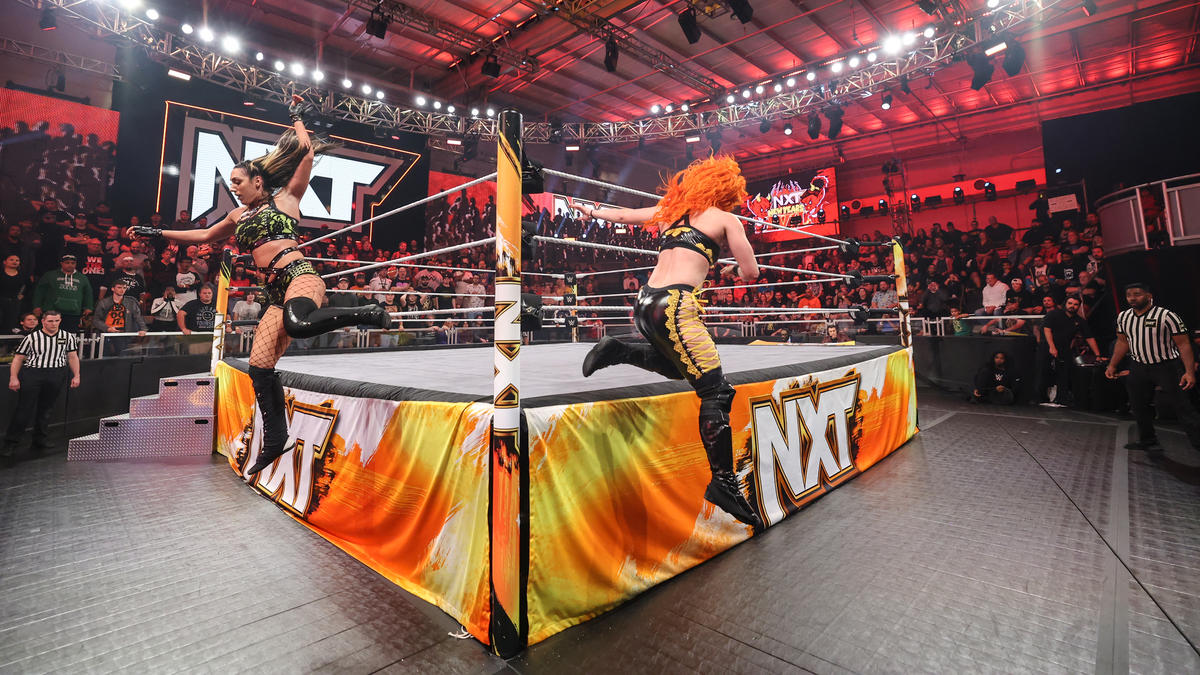 Gigi hits Jacy’s head on the turnbuckle then picks her up over the top, landing on the apron. Gigi is holding on to Jacy’s hair, Jacy kicks Gigi, climbing the post, she goes to pick up Gigi until she is fighting back.

They have a back and forth, they both fall at the same time, referees are arguing on who is the winner, they review the tape, showing several angels of the fall and both are named number one contenders to Roxanne, their arms are raised in victory. Roxanne comes out to be face to face with her opponents, raising her championship in the air. 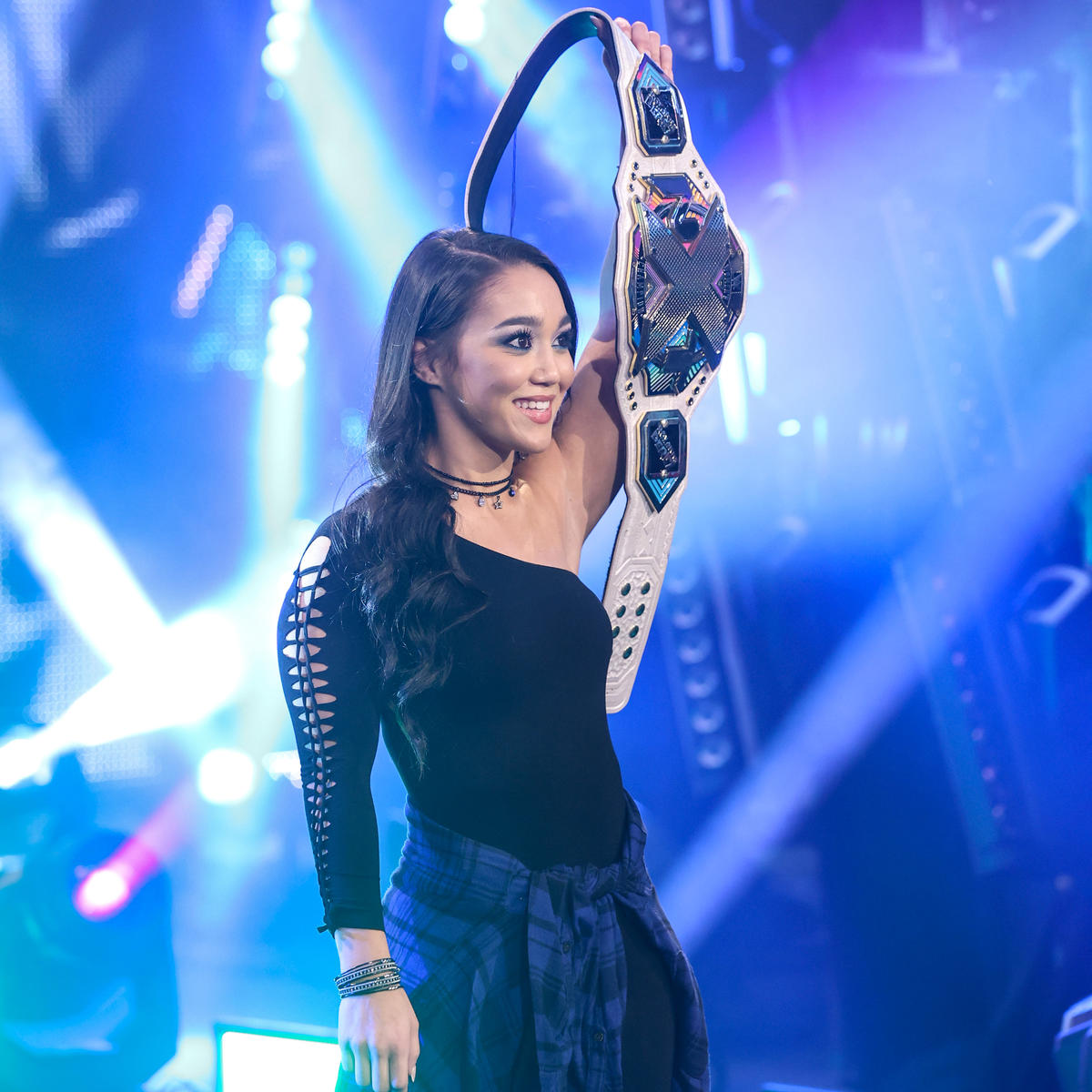 I loved that this match main evented the show, showcasing almost everyone from the roster in one match. I also loved how it brought up several feuds, Elektra with Wendy, Cora with Lyra, Nikkita and Zoey. Based on the roster, we had Meiko, Tiffany Stratton, Blair Davenport, Isla Dawn, Katana Chance, Kayden Carter, Sarray who weren’t a part of it, Jakara was removed from it, replaced with Alba Fyre and Yulisa Leon who has been injured. I would have loved to see Jakara here instead of Dani Palmer but I really liked seeing different women facing each other and the conclusion with Gigi and Jacy.

Even with Roxanne standing by the entrance, Jacy had a different look as Gigi looked at Roxanne. From that standpoint, they have to face each other sometime during the match as I don’t see Roxanne losing it so it’s a way to protect her from getting pinned, it’ll be interesting to see how this plays out with their revenge tour.