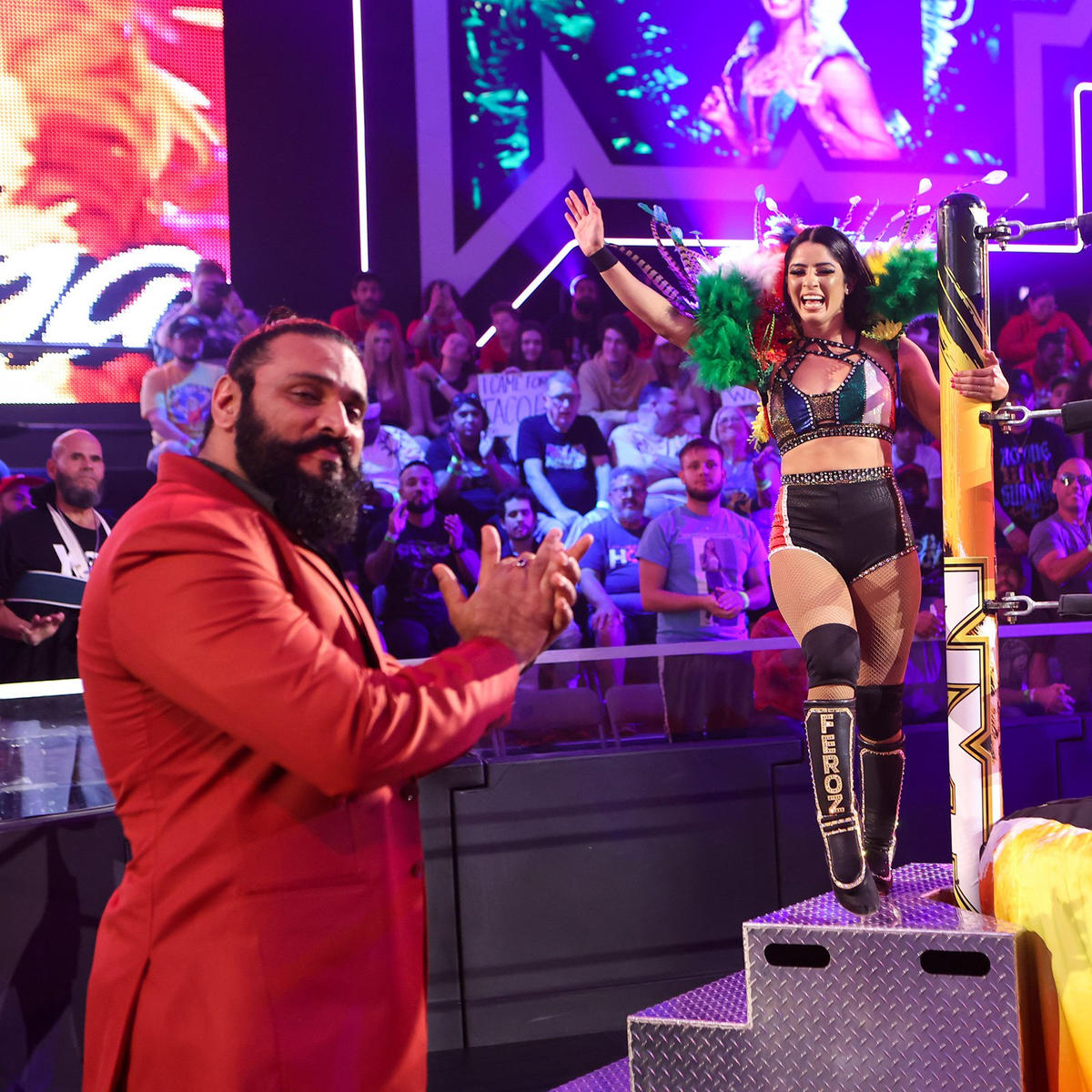 Before the match, Valentina is backstage with Sanga, since Yulisa isn’t there, she asked him to be in her corner. Sanga accepts, Indi interrupts her. Indi tells her, “That might be your jungle but tonight, it’s my ring,” as she exits the room. 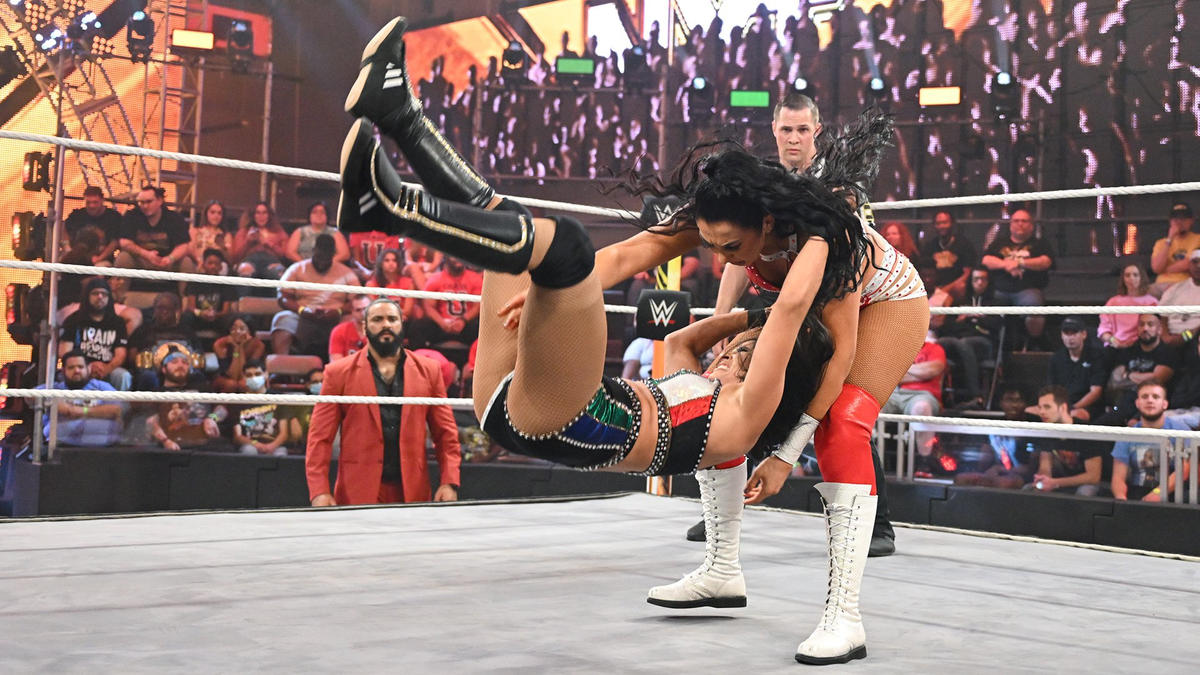 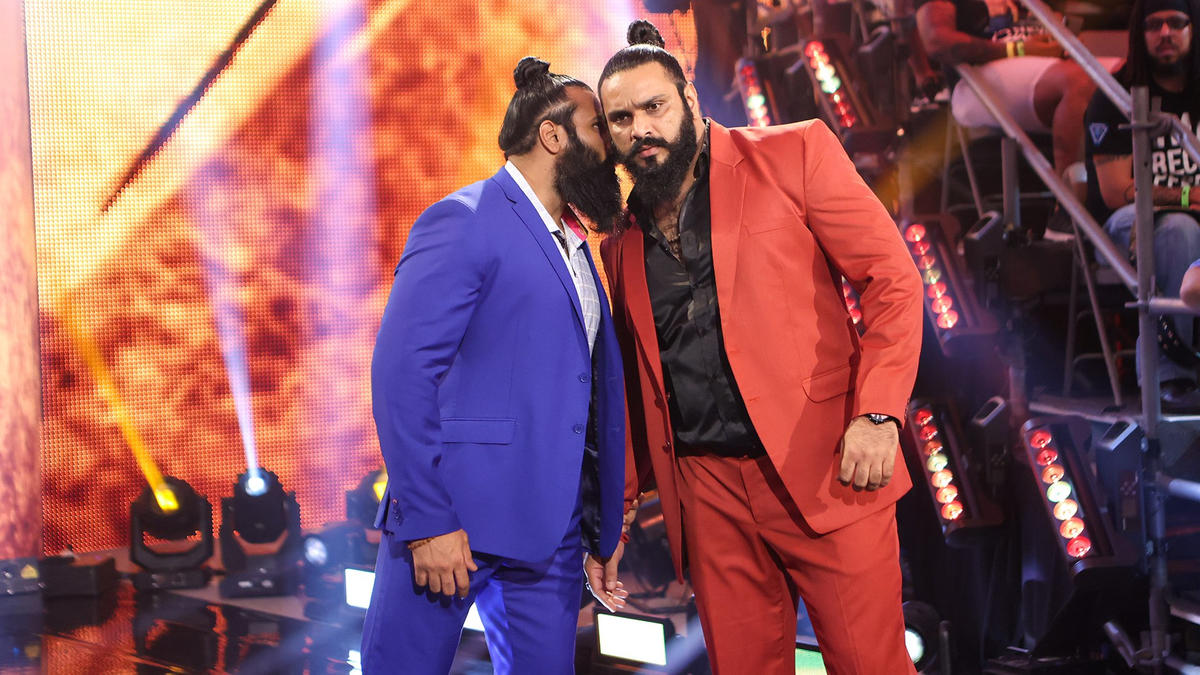 Indi sets up a submission, while Veer makes his way to Sanga. Veer is whispering something to Sanga who leaves right behind him, leaving Valentina alone. Valentina attempts to fight back, Indi responds with a knee to her abdomen. 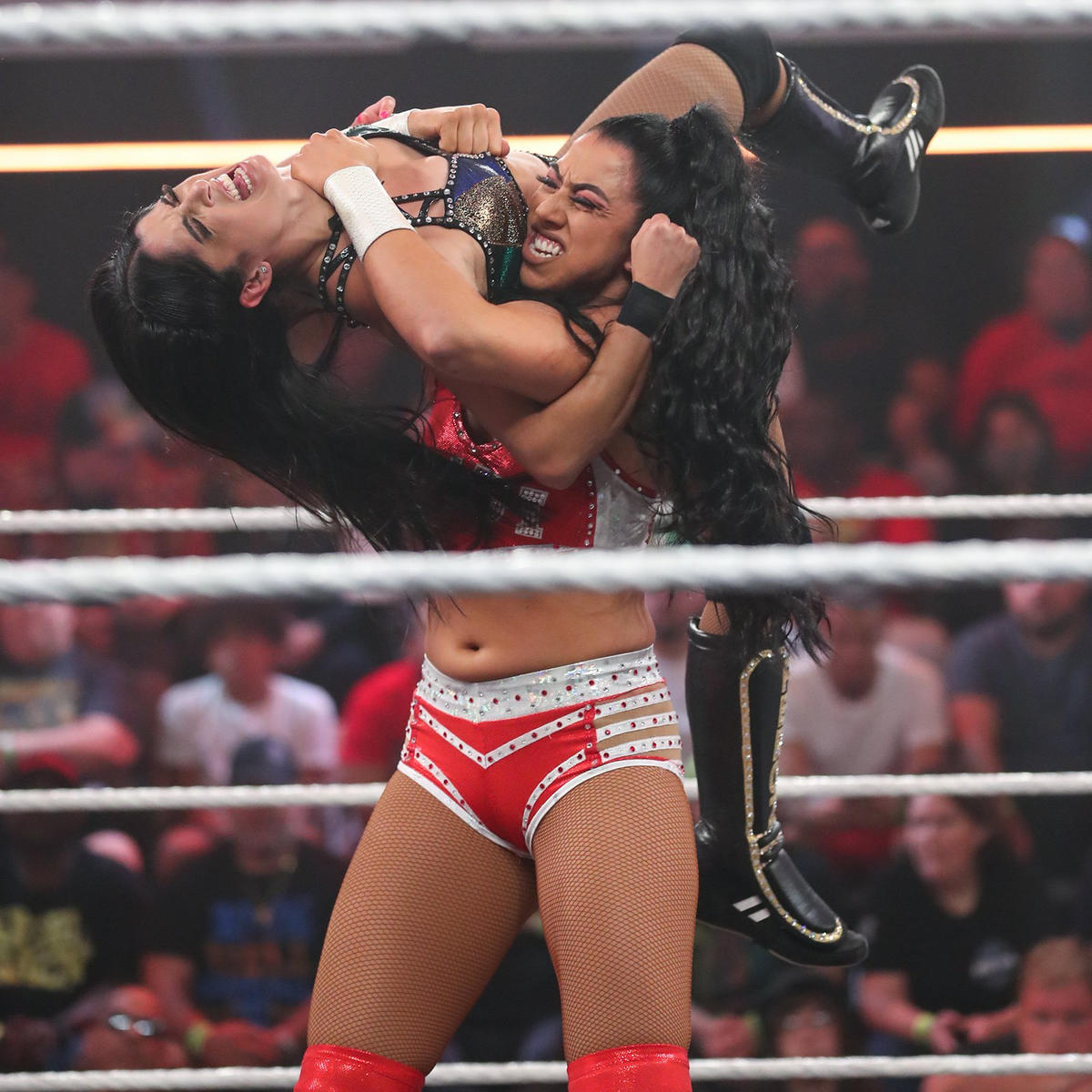 Indi lifts Valentina on her shoulders for a submission while Valentina is screaming. Valentina is about to wiggle from it, landing by a corner. Indi runs after her, Valentina is able to stop her with an elbow as she climbs the ropes, holding on to Indi’s arm. 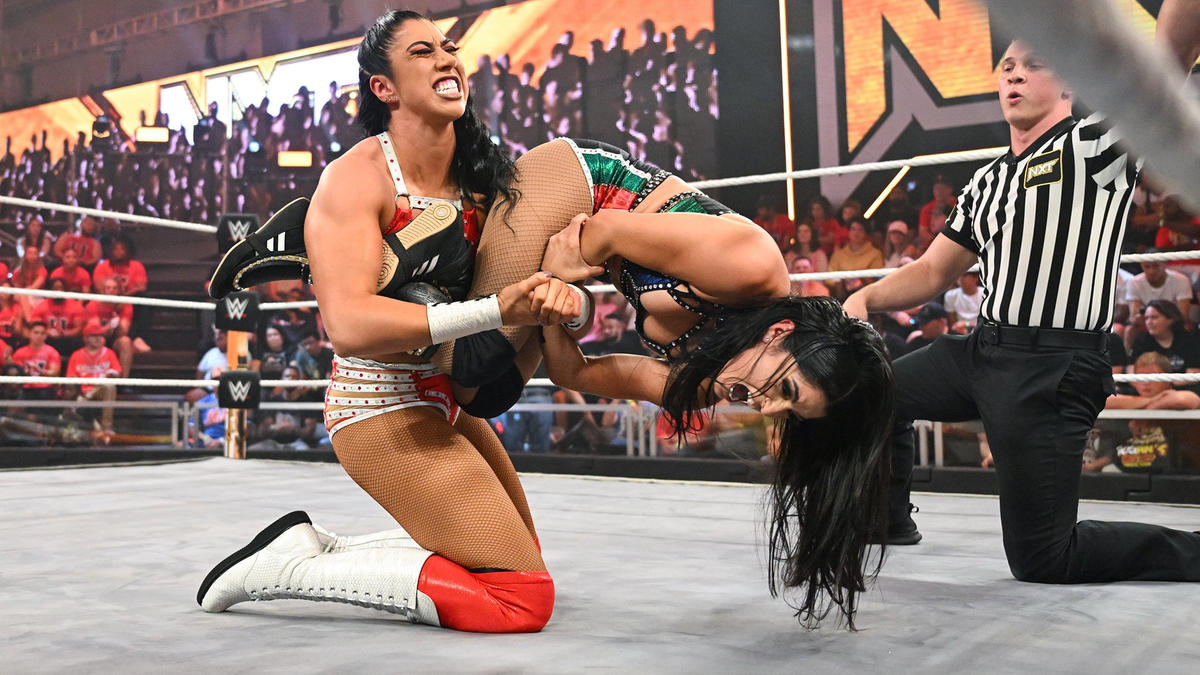 Valentina comes down while holding Indi’s arm, turning into a submission maneuver. Indi works on reversing it, so Valentina isn’t able to lock it in entirely. Hartwell is able to lift Valentina, drop her on the mat to break the submission. 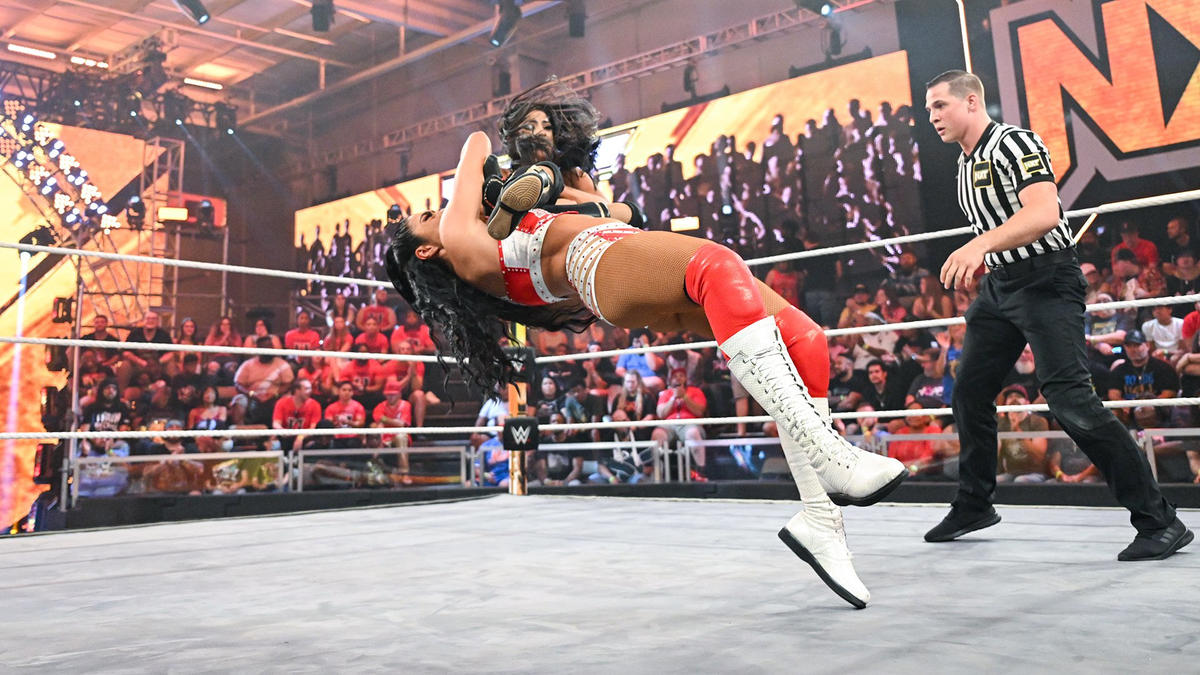 Indi is trying to grab Valentina, but Valentina grabs Indi’s arm while Hartwell wiggles toward the bottom rope to break it. Valentina keeps it on until the referee counts her off after Hartwell puts her foot on the bottom rope. Valentina knees Indi in the face and attempts a pin. Indi recovers in a corner when Valentina realizes Sanga has left. 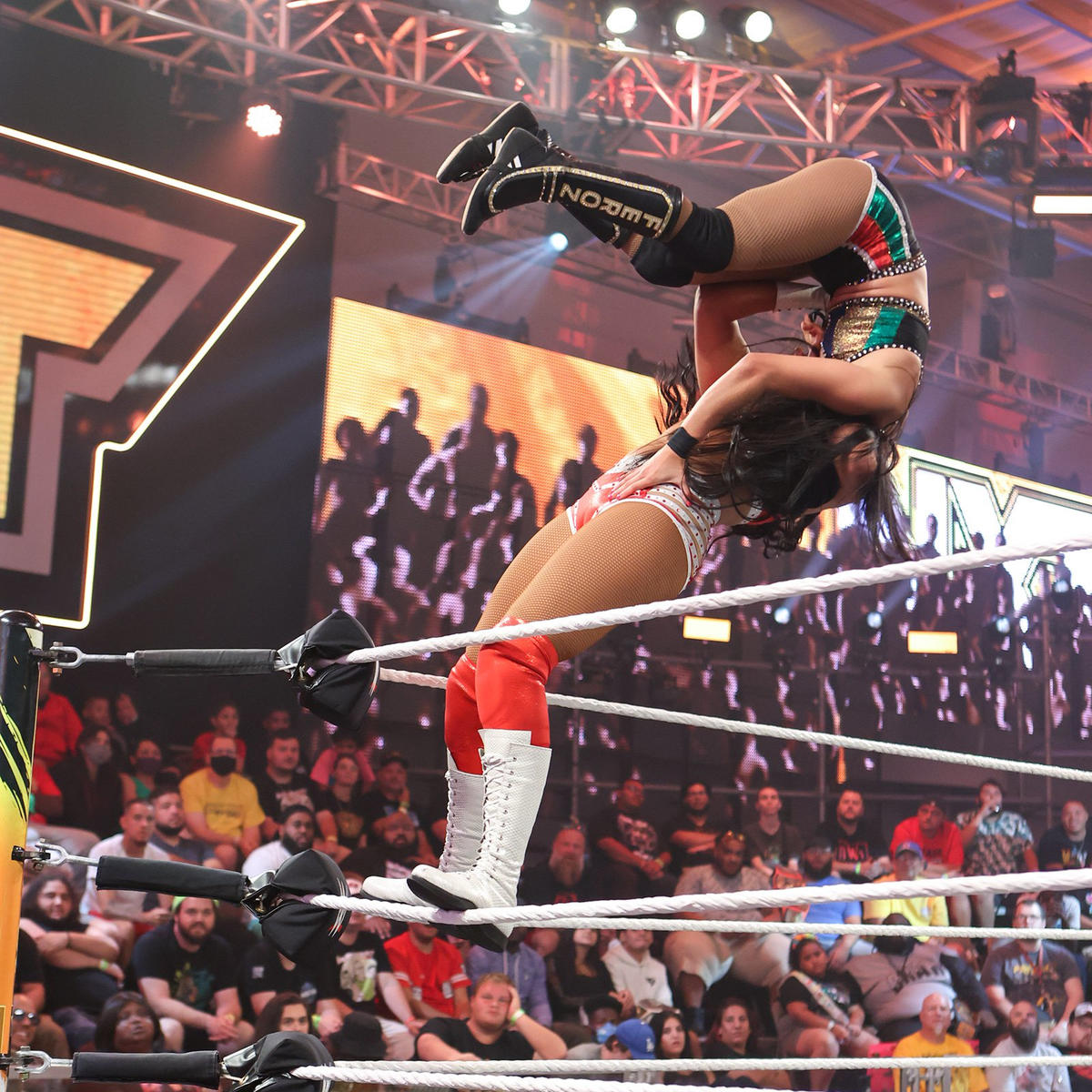 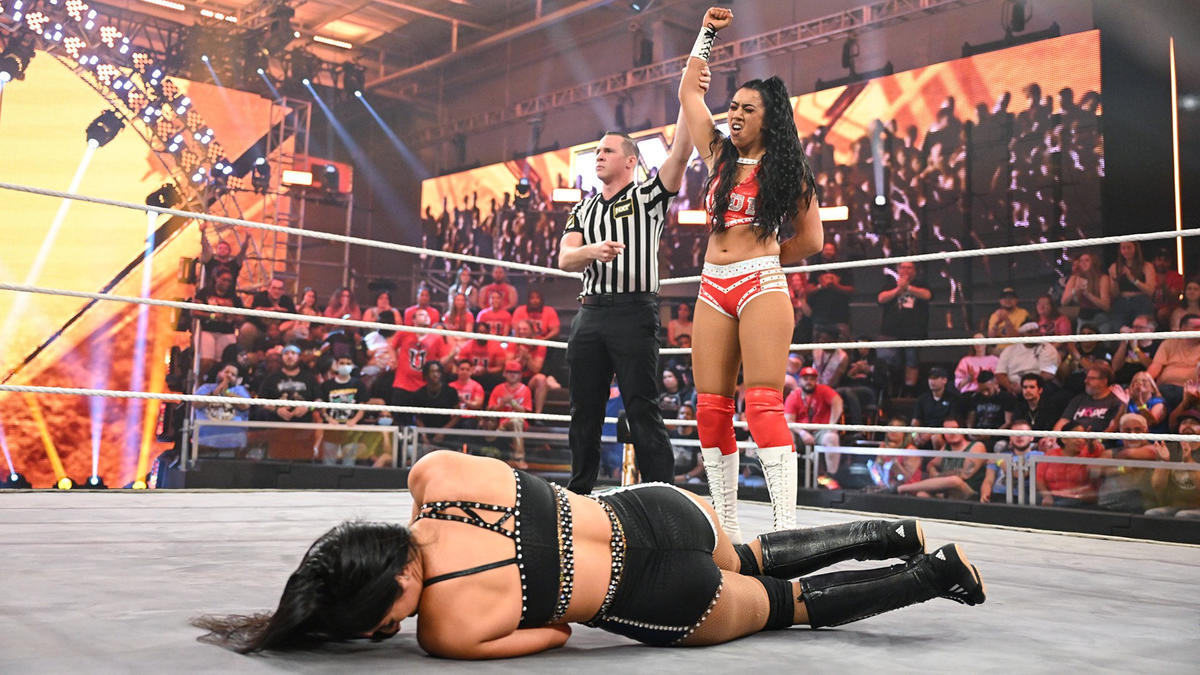 Even though the match wasn’t long, I love the story it told when Valentina realized Sanga left. Also, it really showcased Valentina as a performer, made me wonder about the direction of Indi’s character going forward.

Cora is being interviewed about her upcoming Pick Your Poison match in which Roxanne Perez picks an opponent for Cora. Jade says she has the whole roster to choose from, saying “the hardest will be narrowing down exactly who I want to pick.” Then says, “It must be hard for Roxanne to get in touch with anyone considering nobody ever liked her. I can’t imagine what it would be like to be ghosted by everyone from RAW and SmackDown.” McKenzie tells Cora that she spoke with Roxanne earlier and her DMs are full of options, shocking her. McKenzie also tells her Roxanne is going to SmackDown to handpick Cora’s opponent which makes Cora nervous. Cora excuses herself to make some calls, asking McKenzie for Ronda’s phone number, McKenzie tells her she doesn’t have it and Cora leaves but tells the audience she does have it.

I like how character changed from being confident to being nervous about Roxanne getting responses from the roster. I love the inclusion of the women from the main roster in this storyline too.

Jacy tells McKenzie they should be number one contender instead of Zoey and Nikkita but Alba had to jump in the parking lot last week and tonight she is getting revenge. “Toxic Attraction doesn’t fear the flames like everyone else she intimidates around here,” Jacy says. Gigi says, “Jacy is about to take care of Alba Fyre because when you mess with our gold, we will walk through fire to get our revenge,” as Jacy nods. Jacy says, “I am going to send Alba Fyre right back to her relatives of middle earth, a hot mess and if she wants to surprise us again, maybe we have a surprise waiting for her in return,” as they both leave smiling.

Kiana is at her offices with the blue prints to Chase U in the background. She’s on the phone talking about the land, stating “the land that it’s on, it’s more valuable than the college itself.” She also says that she’ll be facing one of the Chase U students tonight which will “make the deal more enjoyable.” She also says it’s one of her acquisitions to whoever she’s talking to.

I wondered why Kiana said she was facing one of the students from Chase U when so far, the only female student that has been highlighted is Thea Hail. Other than that, I am enjoying her character development. 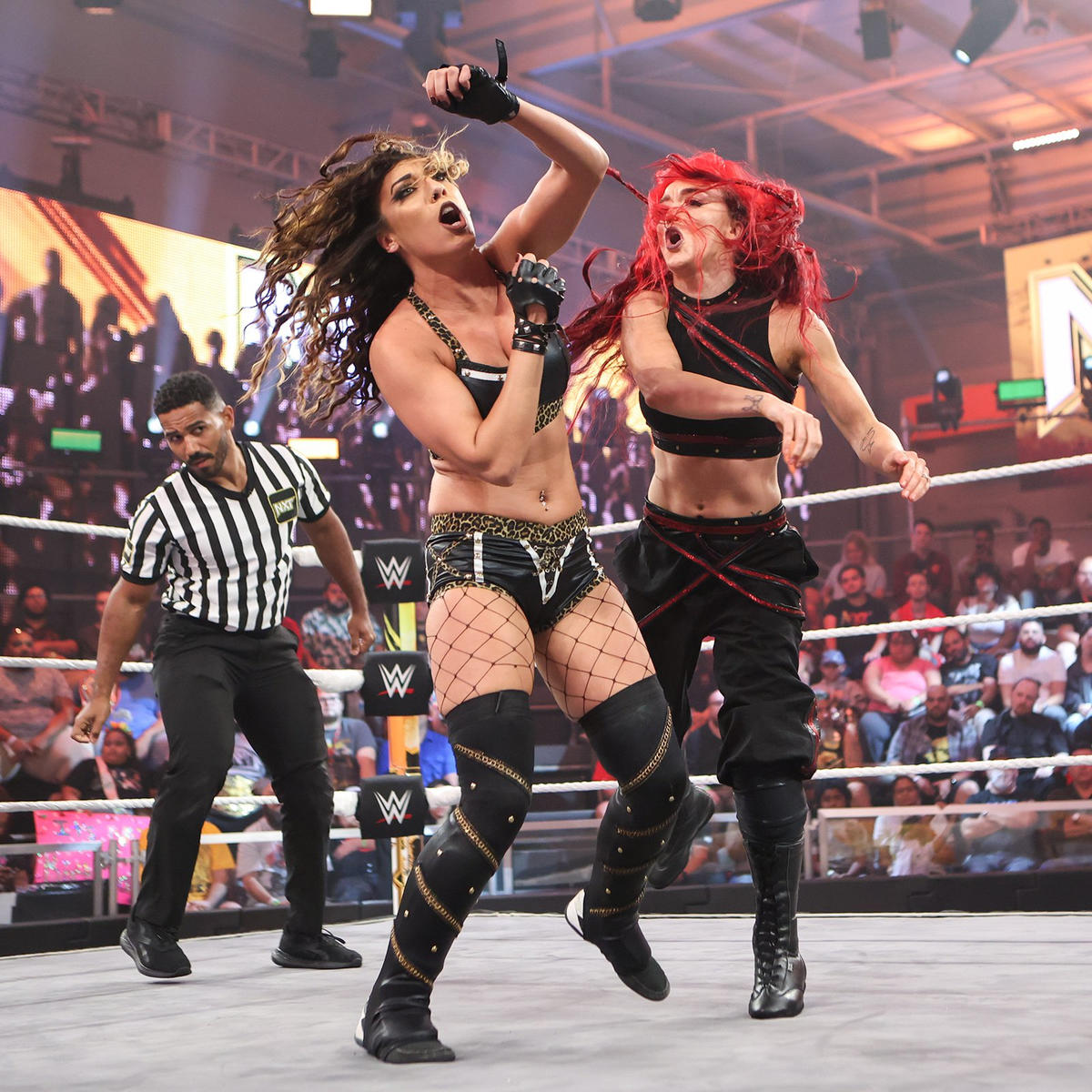 Jacy insults Alba and knees her, but Alba dodges. Alba sets up the Gory bomb when Jacy runs to her again, but Jacy has scouted it and drags Alba’s arm to escape. Fyre lands by a corner. Alba runs toward Jacy, ready to shoot, but Jacy rolls up and Alba tries a crucifix pin. Alba returns the favor after Jacy clotheslines her and shoots her in the face. Jacy knees Alba’s abdomen, pulling her to the ropes, but Alba reverses it, knocking Jacy off her feet. Alba pulls Jacy outside to shoot her face. 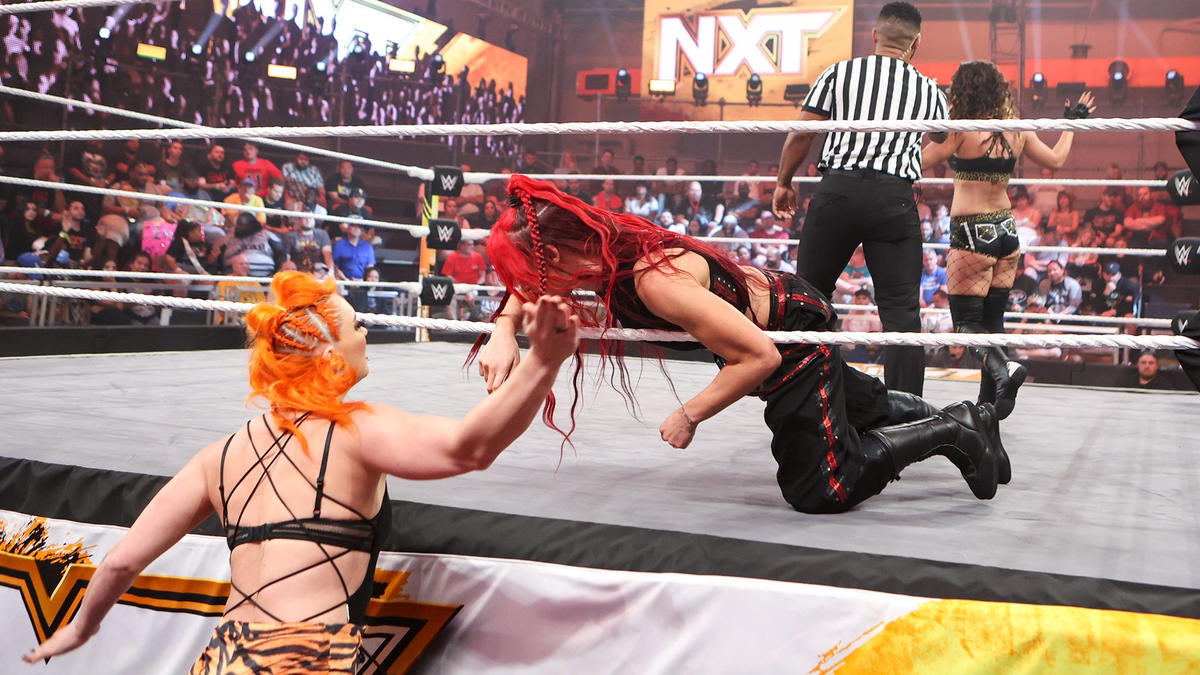 Alba is going inside when Gigi comes close to her making Alba stop but Jacy takes advantage with a forearm shot to Alba. Jayne kicks Alba until the referee counts her, then Gigi slaps Alba. Jacy runs to the corner and hits Alba with an elbow and canton as she leans on the bottom rope, dragging her for a cover. Jacy sets up a submission, Alba picks her up, Jacy responds with elbow to Alba’s face to break it up. Jayne is going for a shot, Alba holds her arm to stop her, Alba chops her to cause her to stop, they do it again. 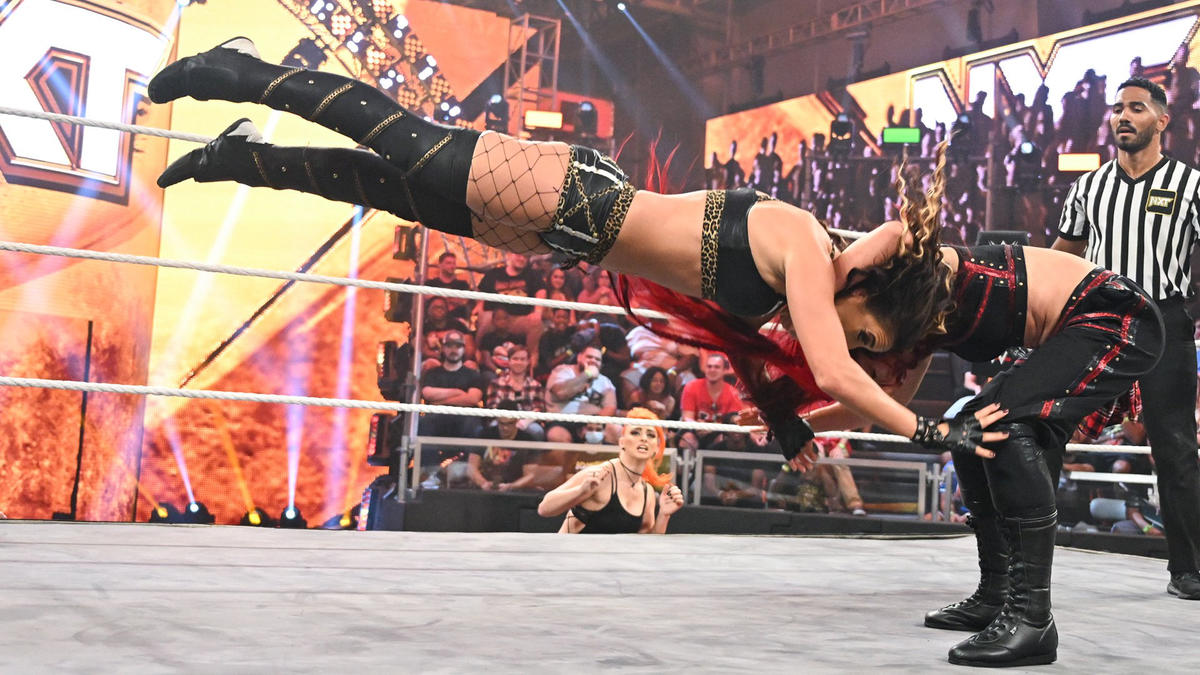 When Jacy is going for a third one, Alba grabs her, lifting her to plant her on the mat, as Jacy is making her way up, Alba hits her with a few knee strikes. Alba drags Jacy to a corner, but Jacy reverses it, Alba lands by the turnbuckle, Jacy hits her with a neck breaker and a cover. 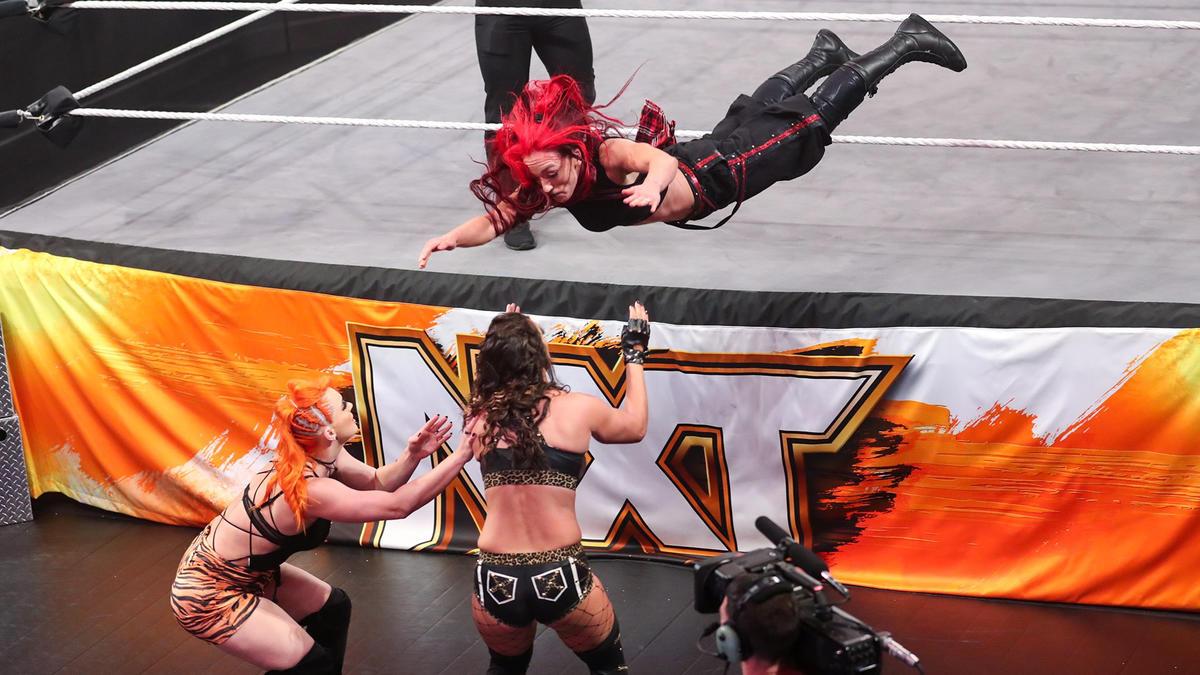 Jacy grabs Alba’s hair and lifts her on her shoulders, placing Jacy on the mat and cover. Alba stands as Gigi rescues Jacy. Alba pulls Jacy inside by diving on them. Fyre prepares for the Gory Bomb, but Gigi distracts her on the apron. Alba knocks her out, Gigi falls outside, Jayne pins her from behind. Alba avoids a shot from Jacy, kicks him, and sets up the Gory Bomb for a pin to win.

Sonya Deville, Mandy Rose’s best friend, attacks Alba in a hoodie as she leaves. Sonya removes the hoodie and jumps the barricade. Vic comments that she may be the surprise Jacy and Gigi mentioned earlier. Sonya throws Alba to the barricade. Deville shoots, Gigi assists, Jacy joins. 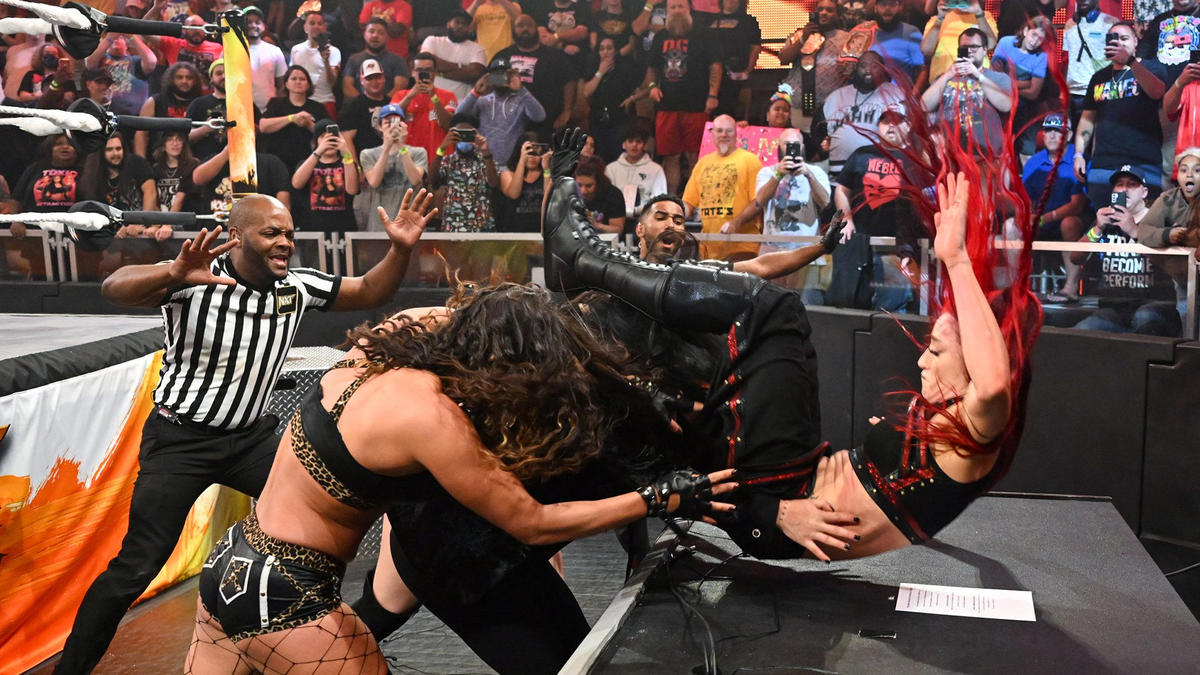 After throwing Alba to the steel steps, Gigi and Jacy hold her while Deville kicks her. Sonya clears the commentary table, Dolin and Jayne help Alba with a triple power bomb, and they smile as Alba lies there.

I didn’t realize until later that Mandy was absent due to her brother’s passing, my condolences to her and her family. I did enjoy the addition of Deville here and how she’s assisting Rose even during her absence.

The video package begins with a recap from the match last week. “I understand Kayden and Katana, they have been together forever,” Nikkita says, “but we complement each other.” Zoey says, “You’re the type of girl that is take it or leave it. I don’t care what anyone thinks, and I am a little more reversed and that’s okay.” Nikkita tells her, “You act like your focus and determination is a bad thing, it’s not.” We see Nikkita’s WWE tryout, Triple H tells her Zoey was there a year and a half ago, Nikkita tells him that Zoey has been so helpful to her.

“Dude your drive is incredible, what Zoey can do in that ring, is amazing,” Nikkita says. “The way you’re developing so fast is fun to watch. I am starting to loosen up just a bit here,” Zoey responds. “One thing we can agree on, no matter the time, no matter the date, when we get that title match, we’re becoming NXT Women’s Tag Team Champions.”

Even with their handshake, I don’t believe Nikkita and Zoey as a team especially when they’re going against Katana and Kayden. The video package was a good way to show how they have been connected since Nikkita’s tryout though and how different they are.

Sonya tells McKenzie why didn’t you ask Alba Fyre as she was surprised to see me. “Mandy and I may have had our differences but she’s still my best friend. If Jacy and Gigi are her girls then in turn, they’re my girls, does that makes sense?” Sonya says, “You can’t abduct the greatest women’s champion at NXT and expect to get away with i, consequence free.” Deville tells McKenzie, “i want you to wait outside of medical, when Alba comes out, I want you to tell her that next week I’m gonna be standing inside the ring waiting for her. But if she chooses to show up, she’s not going to make it to Halloween Havoc.

I love how simple Deville explains her support and assist for Mandy, they had their differences but they’re still best friends. Also, having another female from the main roster being a part of next week’s show so is also nice to see.

Robert Stones goes inside the ring as the match begins, he has some business to talk about and apologizes to Kiana for interrupting, Kiana nods. Stone says the world is laughing at him because of Thea because she slammed him. 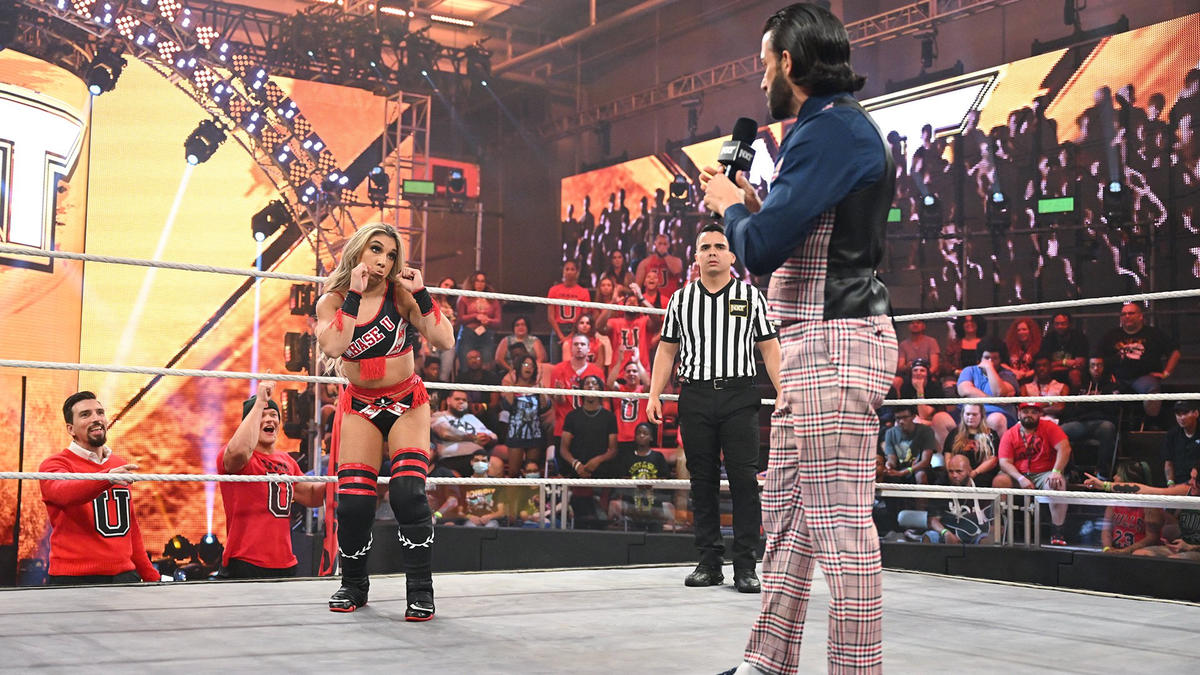 As he talks, Thea catapults him and kicks him until he leaves the ring. Kiana is ready by the ropes, Thea is fired up, Kiana hits a swinging face buster and covers for the win. 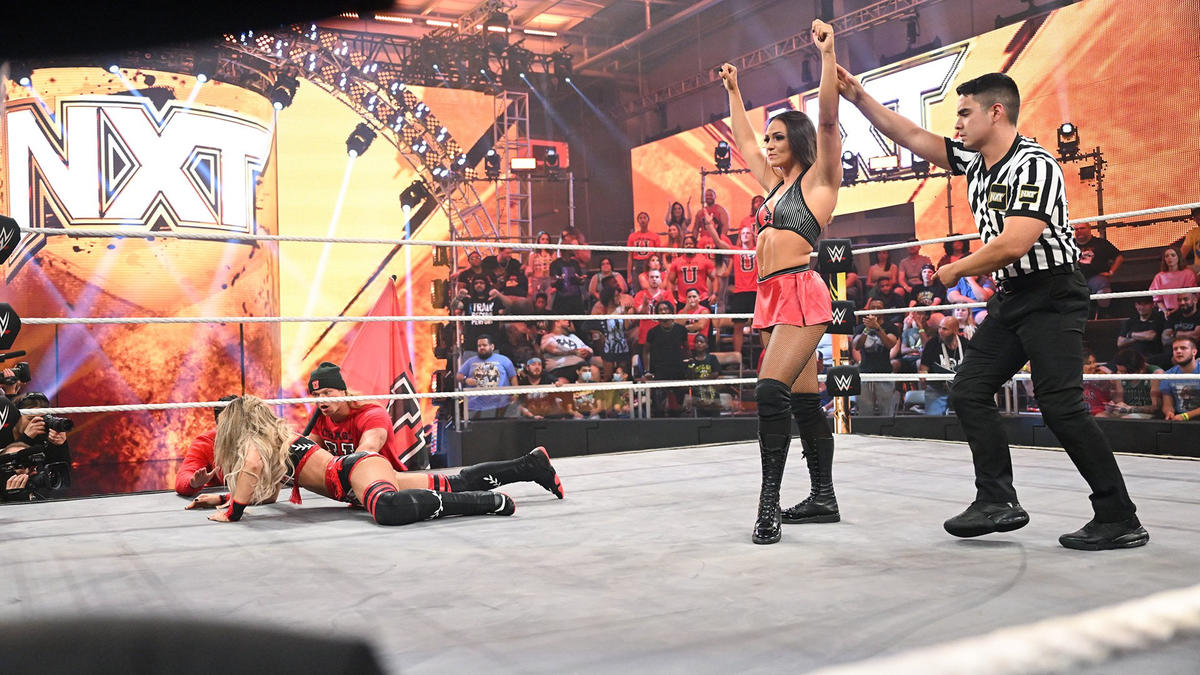 The match was so much shorter than I expected it to be but really showed both of their characters very well.

Cora interrupts McKenzie, saying that since Roxanne is going to SmackDown, she is going to RAW since Rhea Ripley replied to her. Jade will choose Roxanne’s opponent at RAW.

Pick your poison ☠️ @roxanne_wwe and @CoraJadeWWE will choose each other's opponents for this Tuesday's #WWENXT.https://t.co/zdLpN2I31I pic.twitter.com/zH1nmThSFu

I loved having Roxanne and Cora’s storyline having continuity on SmackDown. From having Raquel still discussing Cora and not ignoring their history and also Roxanne having her SmackDown debut, it was incredible to watch.

Check out our NXT AfterShow available on YouTube now!