This week’s NXT 2.0 is fall out from NXT Worlds Collide, is how NXT moves forward with including a few of the NXT UK performers in the NXT roster.

Pretty Deadly is admiring having both the NXT and NXT UK Tag Team Championships after Worlds Collide. Lash arrives to admire their championships and victory; she tells them not to listen to not paying attention to what everyone is saying. They insist, asking on what is being told, Legend says that Damon Kemp is the only reason they won. They argue about what was said and that there’s always a problem with people as they give Lash the NXT UK Championships while they leave.

After Worlds Collide, Roxanne is seen bowing in front of Meiko and leaving while Meiko is walking backstage. Meiko is interviewed about the result of her match. Meiko says, “I’m disappointed but I’m proud of everything from NXT UK.” She is interrupted by Cora who tells her that Meiko “had a rough night” but proceeds to challenge her to a match because “one thing she hasn’t done is experience the Generation of Jade.” Meiko apologizes to Cora; Jade responds that she knows it’ll be another loss for Meiko but “she’d get the chance” to wrestle Cora and asks if the Final Boss is scared. Meiko tells her she already has a match against a “very respectful Roxanne Perez.”

Before the match begins, they realize Mandy is on vacation after her victory, but she returns for NXT 2.0’s anniversary. 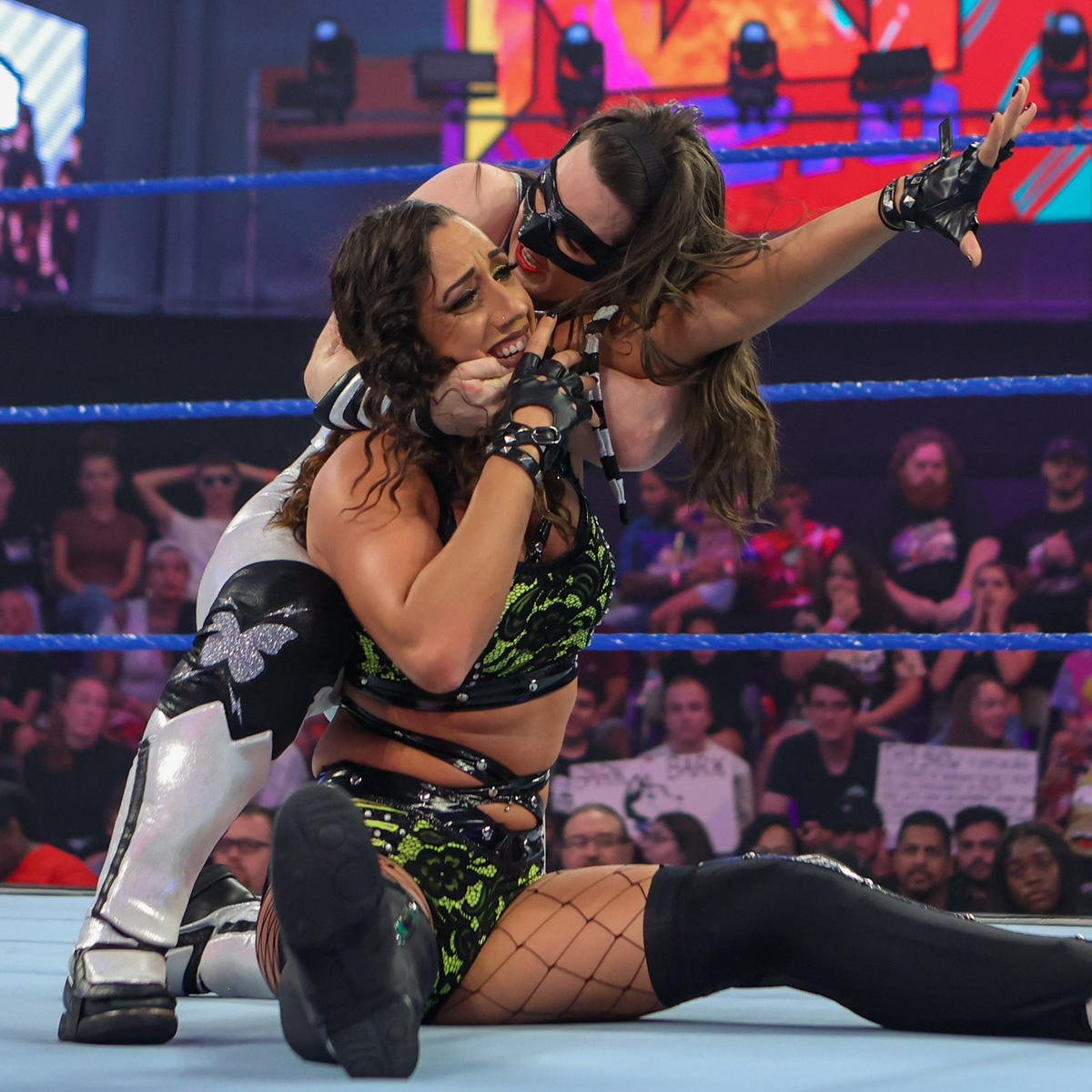 Nikki and Doudrop fought Katana Chance and Kayden Carter for the NXT Women’s Tag Team Championships at Worlds Collide. Gigi and Jacy’s interruption caused the champions to retain when Jacy held Nikki, preventing her from saving her partner and the match.

Nikki backs Gigi to the ropes as they lock up. Gigi urges Nikki to break it up, so she hits her with a forearm and drags her to the top turnbuckle. When Gigi bounces off the ropes, Nikki clotheslines her. Nikki drags Gigi to her corner, knocks her on the turnbuckle, and tags Doudrop.

Doudrop elbows and pins Gigi. She headbutts Dolin, lifts her up, and tags in Nikki. Doudrop drops Gigi as Nikki tries a neck breaker and pin. Dolin brings Nikki to her corner to tag Jacy. Jayne chops Nikki and rolls her to the ring; she recovers to kick Jacy, who reverses it into a pin attempt. Jayne drops Nikki’s head while taunting her. Nikki pushes Jacy, then kicks Jayne. She runs to Jacy for a bulldog and pin. 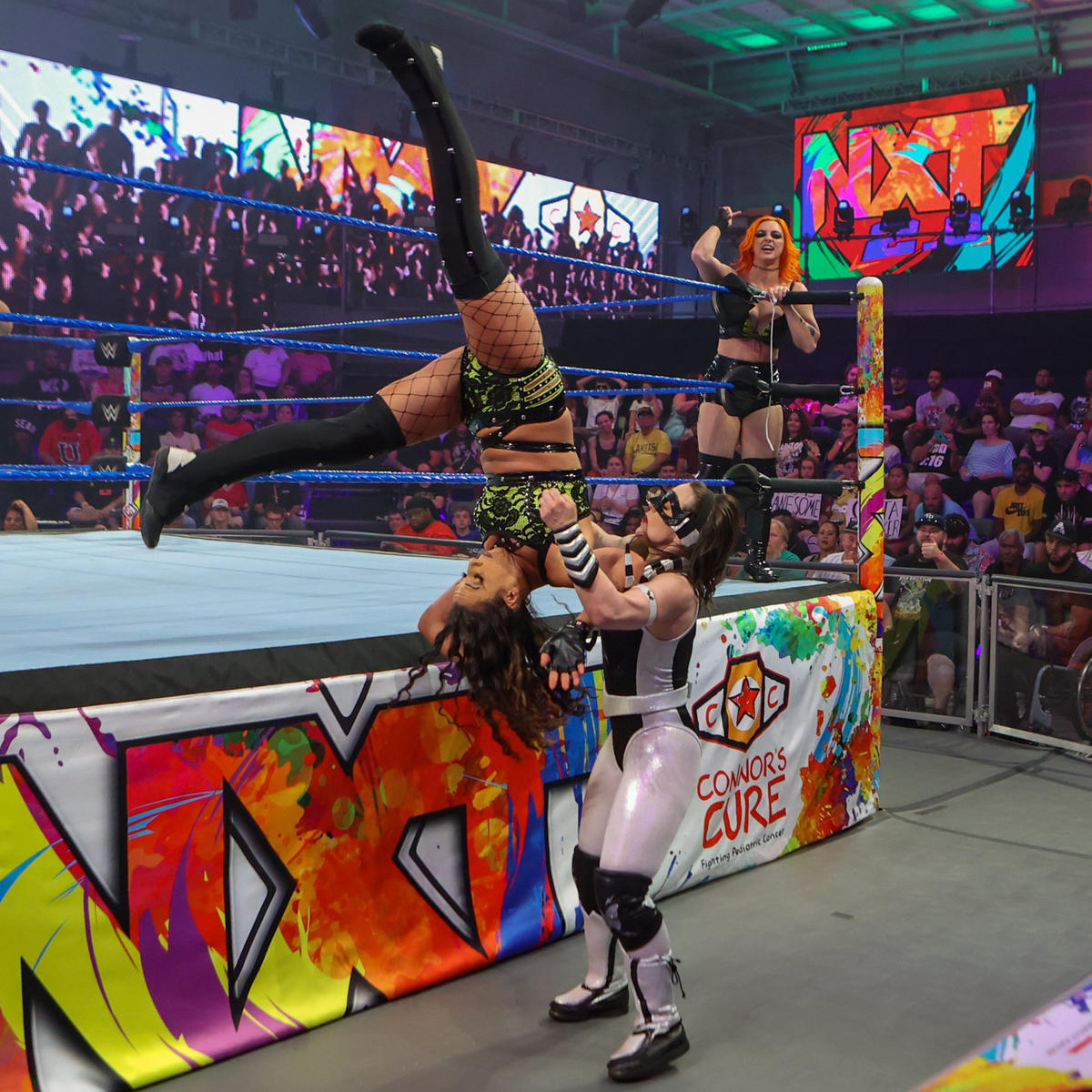 Nikki slaps Jacy’s head and neck with her forearm, then submits her. Nikki attempts a neck breaker as Jacy approaches to break it up, but Jacy pushes her outside. Jacy cannonballs Nikki from the outside, then Doudrop defends her. Gigi kicks Doudrop in the face as Toxic Attraction members celebrate. 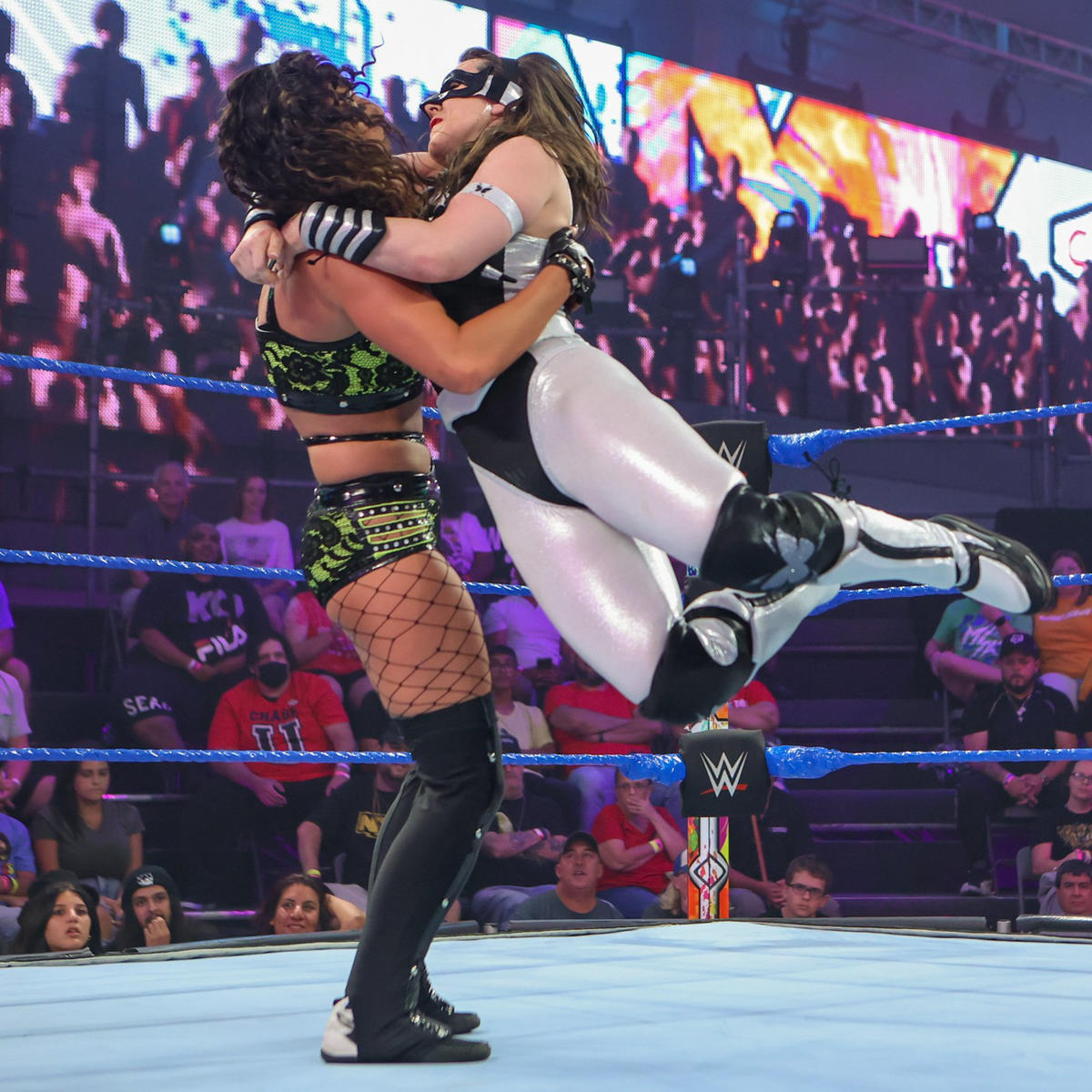 Gigi pushes Nikki to her corner, tagging Jacy. Dolin forearms Nikki, pulls Jacy, elbows Nikki, and Jacy helps launch Gigi for a bronco buster. Jacy cannonballs Nikki and attempts a pin. Jacy holds Nikki in place in her corner for the tag. Nikki hits Jacy’s abdomen while trying to tag in Doudrop. Jacy kicks Doudrop’s hand, down Nikki, and runs the ropes for a centon, but Nikki moves. Both women dragged themselves to their corners to tag in. 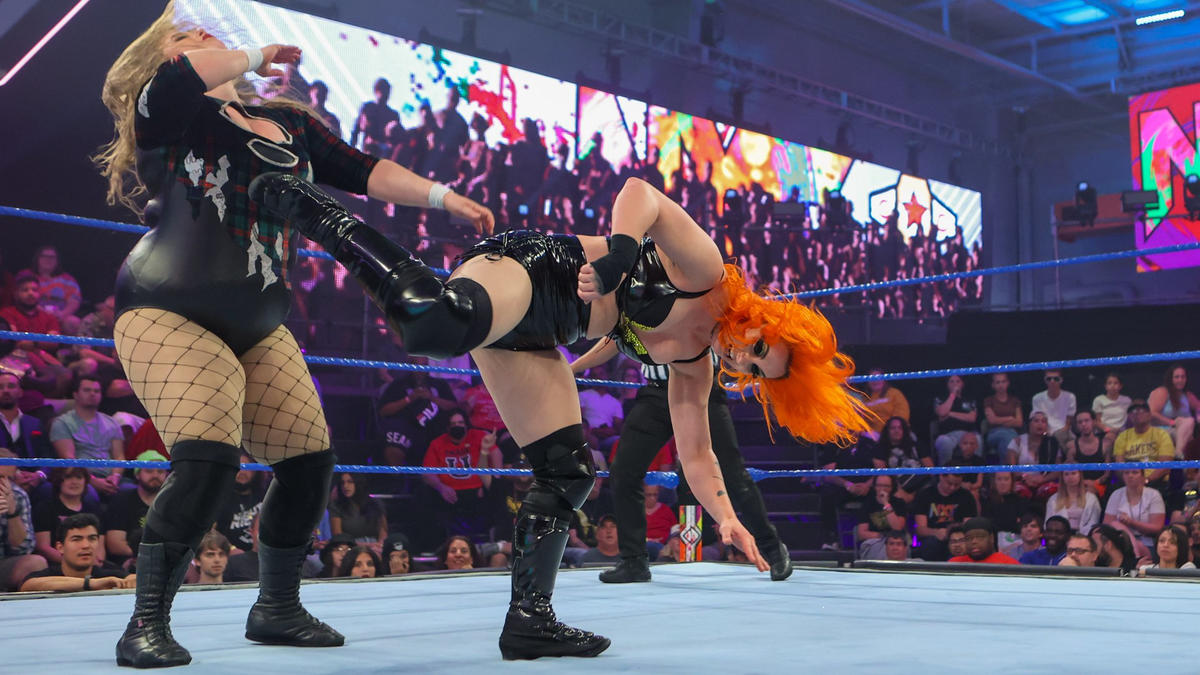 Gigi kicks Doudrop in the face, Doudrop is fired up. Gigi goes for another shot, but Doudrop stops her, head butts her and sweeps Gigi off her feet. While Jacy climbs Doudrop’s back, Doudrop drops her on top of Gigi. Doudrop runs for an elbow cannonball combination to land on top of Jacy and a pin attempt on Gigi. 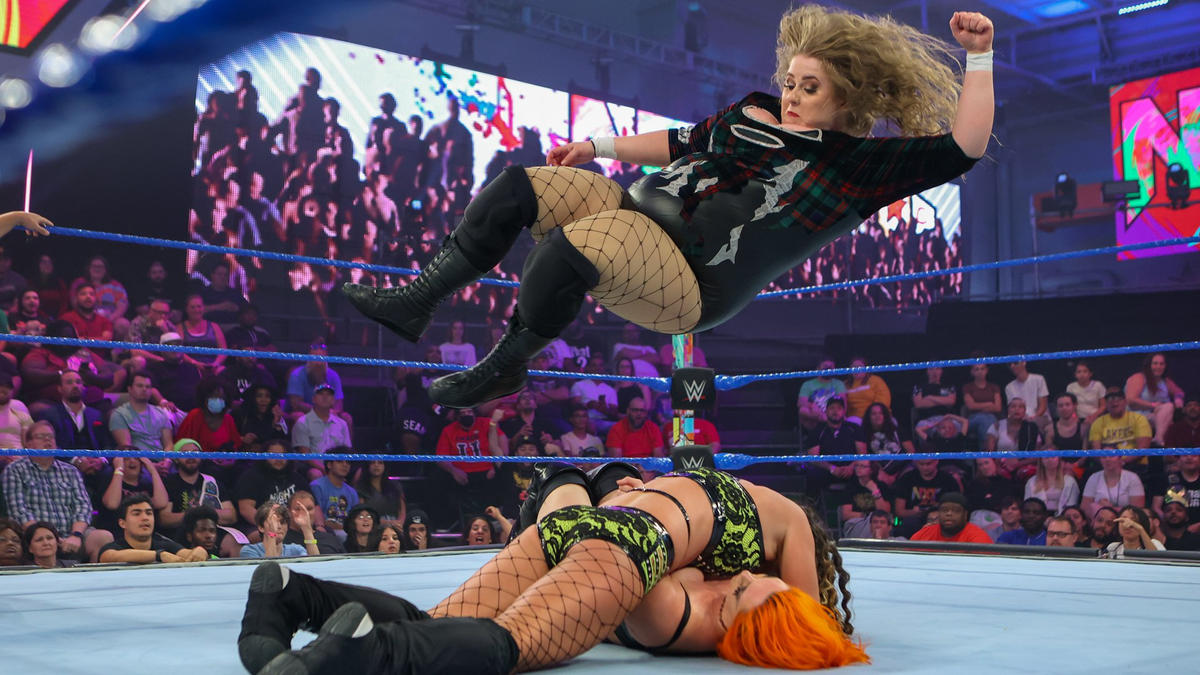 Gigi gets off Doudrop’s shoulders and pushes her towards the ropes. Gigi chases her, going for the next move, but Doudrop reverses it and suplexes her, placing Gigi by the bottom turnbuckle. Doudrop runs for a cannonball, climbs to the middle turnbuckle, and splashes Gigi. Jacy kicks Doudrop in the face to break up the pin. 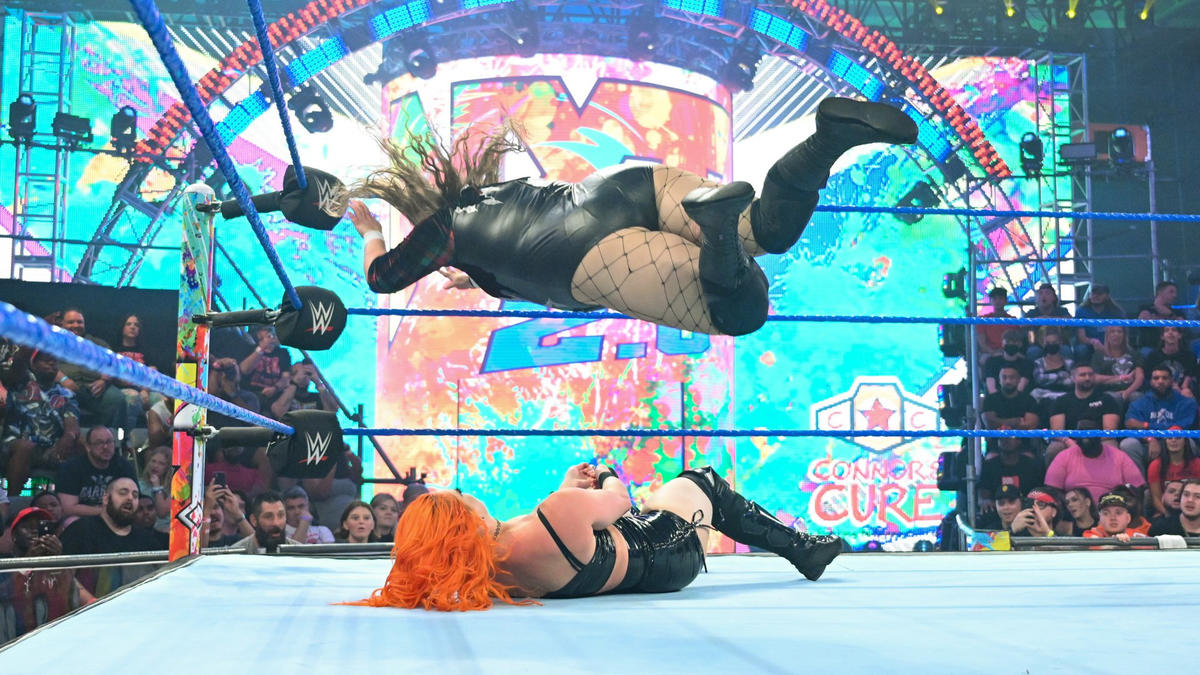 Nikki comes in to defend Doudrop, kicking Jacy’s abdomen, she’s about to drop her outside but Jayne reversed it, dropping Nikki outside instead. Jacy is exiting the ring, Nikki holds on to Jacy’s foot, so she slips on the apron while Nikki opens the skirt, Jacy is trapped while Nikki fires away at her.

Doudrop runs towards Gigi, she kicks her, Gigi climbs to the second rope, Doudrop turns around while Gigi attempts a crossbody but is caught by Doudrop, she plants Gigi in the center. Doudrop runs the ropes then splashes Gigi and a pin attempt for the victory. Nikki and Doudrop hug after their victory, Doudrop is bleeding from her nose. Gigi and Jacy are on the floor contemplating their loss. 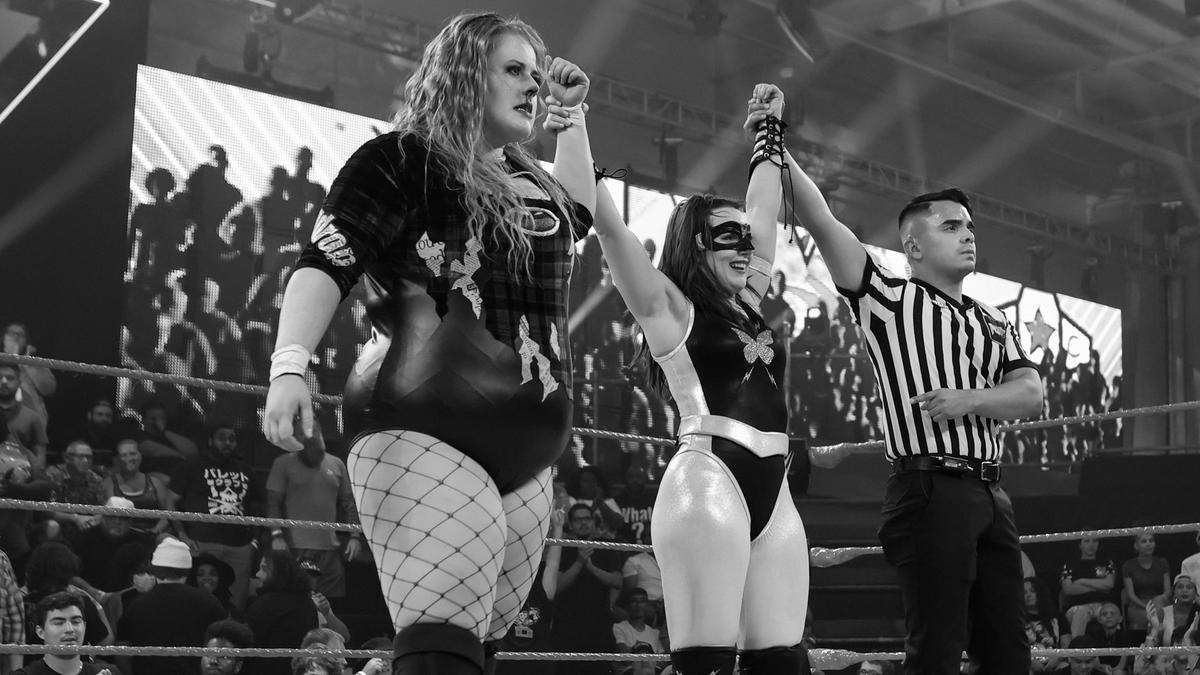 I loved that Nikki and Doudrop were a part of the show after Worlds Collide, it’s awesome to see them team up against Gigi and Jacy. It was a fast-paced match, love that both teams were able to show their offense and double team maneuvers too. I hope Nikki and Doudrop have the opportunity to work with more of the NXT roster, it’ll be incredible. 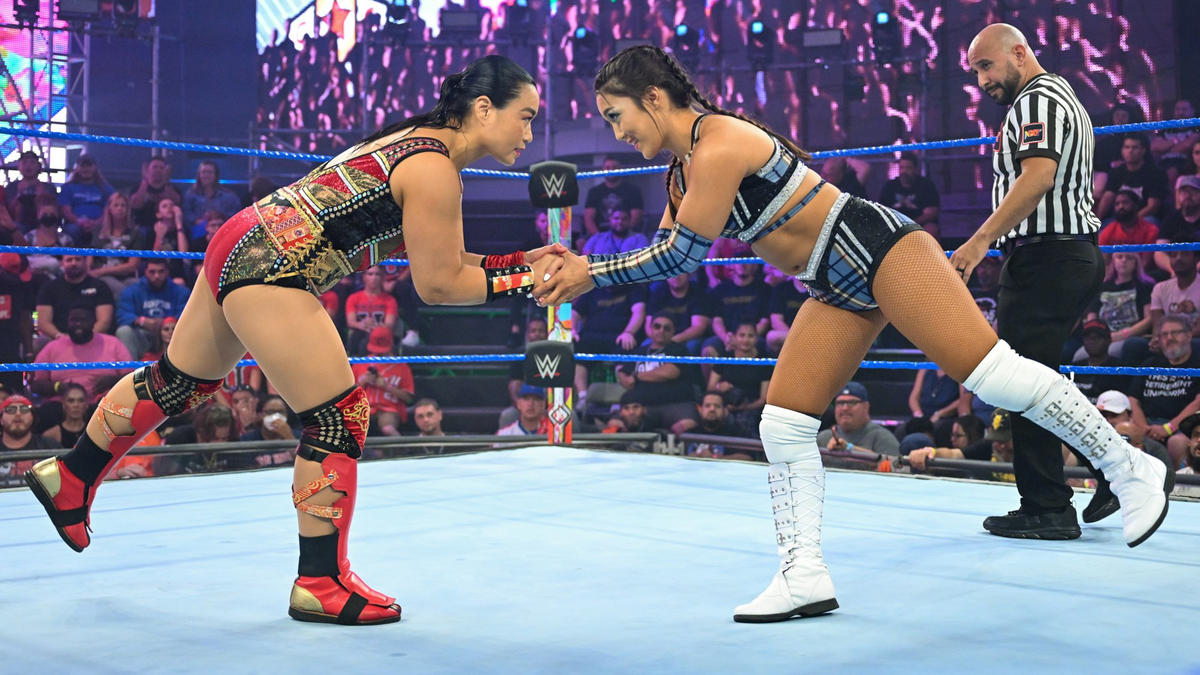 Cora watches Meiko’s entrance while backstage. Meiko locks Roxanne’s arm while putting her knee to her face to gain control. Perez reverses it on Meiko, but Satomura regains control and Perez uses a headlock. Meiko pushes Roxanne towards the ropes to break it up, and they collide in the ring. Roxanne runs towards Meiko, trips, and Meiko kicks her midsection. Satomura drives Roxanne to the ropes, then tackles her. Meiko grabs Roxanne’s hand, kicks her, and pins her. 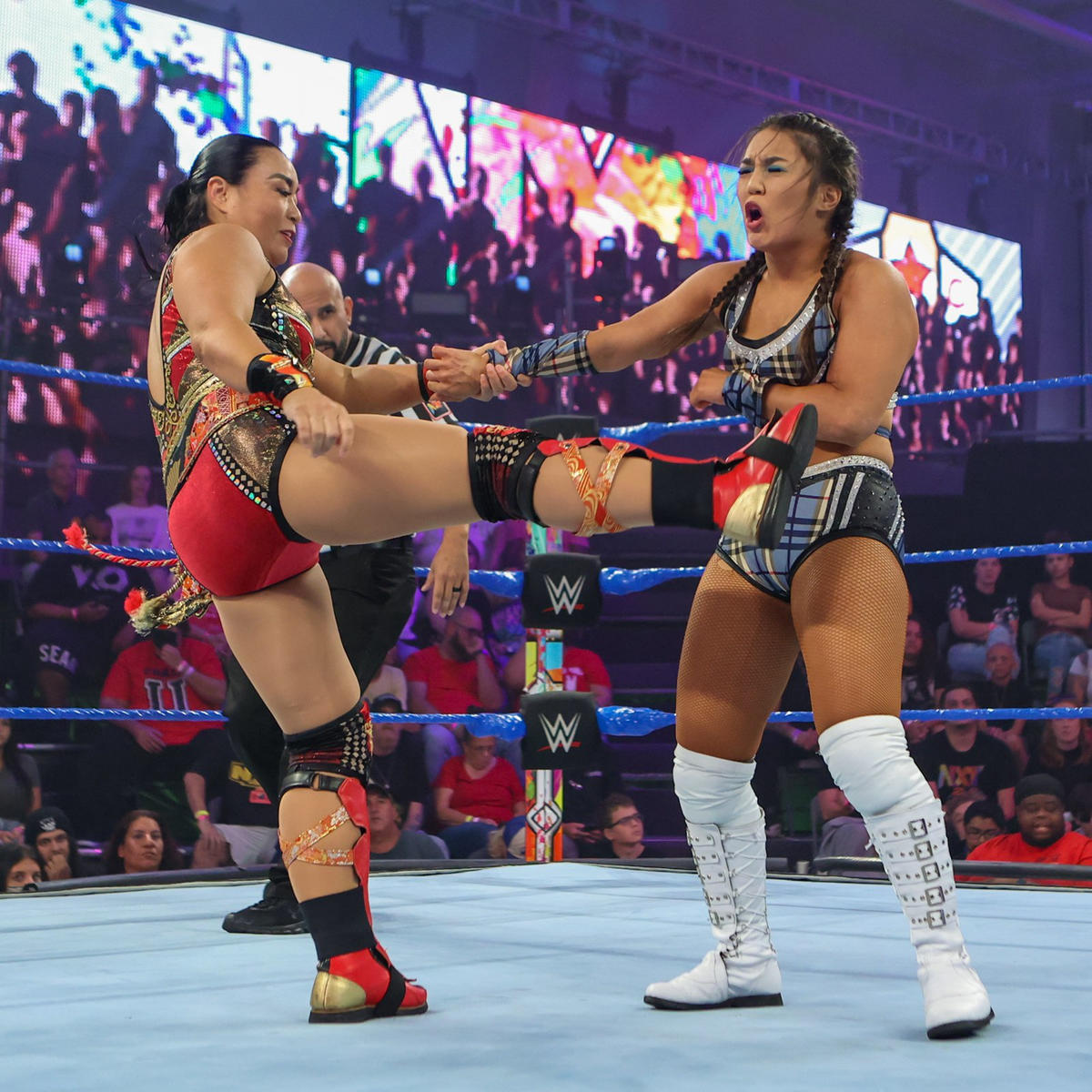 Meiko holds on to Roxanne’s hand, she’s going to kick her but Roxanne ducks, but Meiko still takes her down with the arm bar, Roxanne uses her momentum to roll up Meiko, Satomura breaks it up. She wraps her arms around Meiko’s neck, Roxanne pushes her and separates from her with an arm drag. Perez has Meiko’s arm for a submission, Satomura wraps her legs around Roxanne’s head to take her down. Roxanne does a kick up to break herself free, they come face to face. 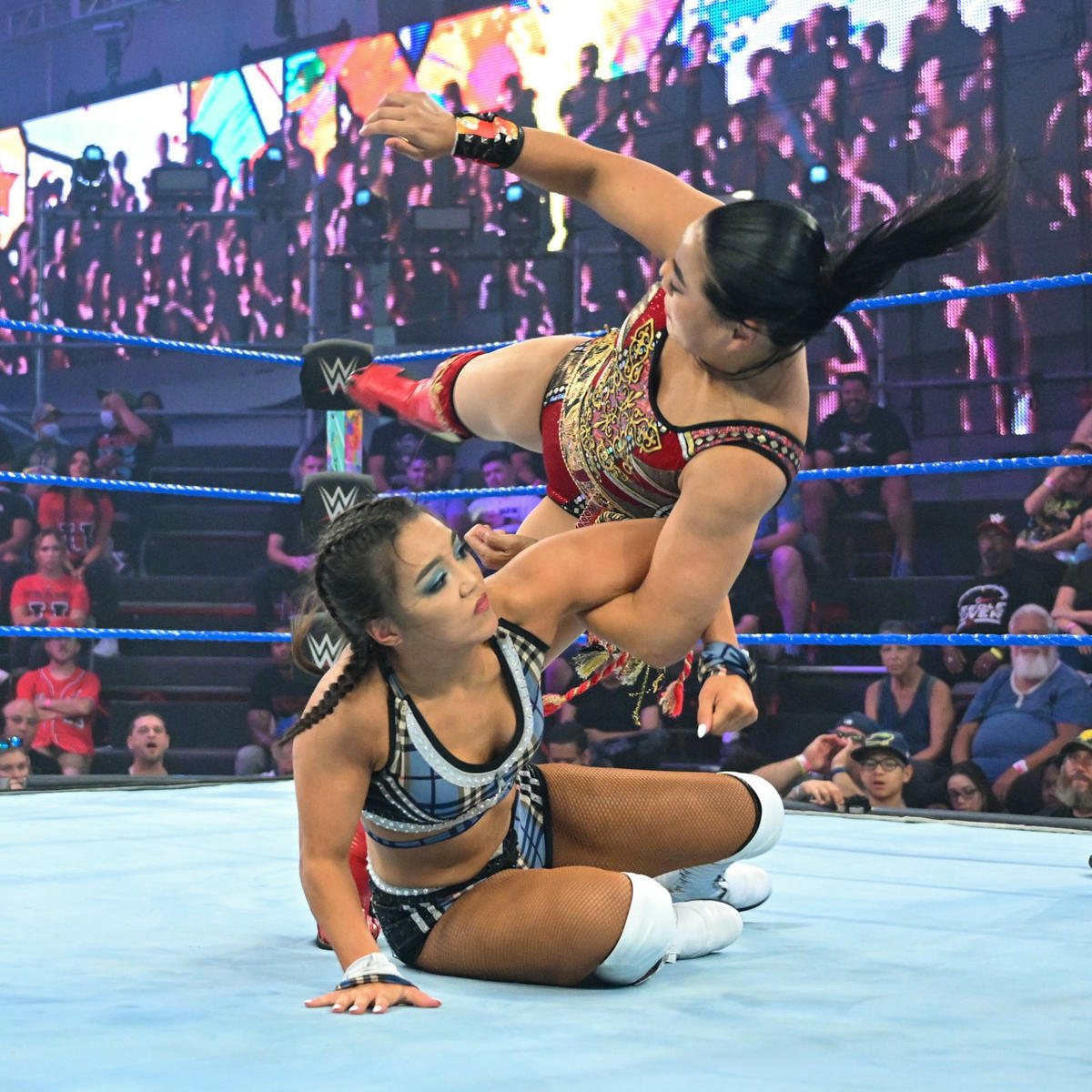 Roxanne ducks to escape Meiko and wraps her legs over her head for a head scissors and roll up. Perez has Meiko’s arm, but Meiko reverses it. Perez pulls free and wraps her legs around Meiko’s head. Meiko has Roxanne in a submission, but Perez fights her off. Satomura ties Roxanne’s hands with her legs for a roll-up pin. Roxanne locks in an STF, Meiko takes Roxanne’s hand to break free and elbows the back of Roxanne’s head. Meiko kicks Roxanne’s leg then a shot to Roxanne’s face, Roxanne with a double kick to Meiko, she goes outside. 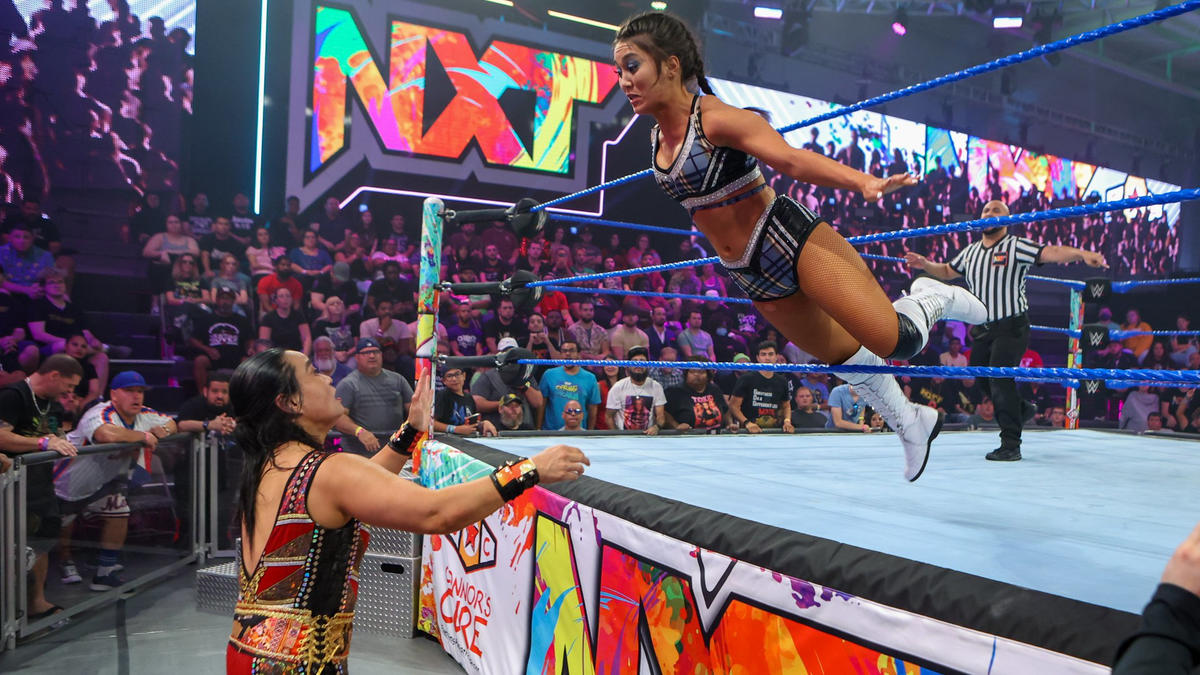 Roxanne runs, dives on to Meiko, fired up inside the ring. Cora is seen watching the match then leaving the backstage area. Roxanne brings Meiko inside the ring. Meiko has a submission on Roxanne, Perez is trying to break it, but Meiko reverses it and keep it locked in. Roxanne breaks it, does an uppercut to Meiko, Satomura hits her with one of her own, Roxanne does another one. Meiko holds on to Roxanne’s head for another uppercut. Roxanne recovers, hitting Meiko with several uppercuts, Meiko lands by the ropes. Roxanne pushes Meiko, they run the ropes until Roxanne hits her with a double forearm shot twice then a drop kick. 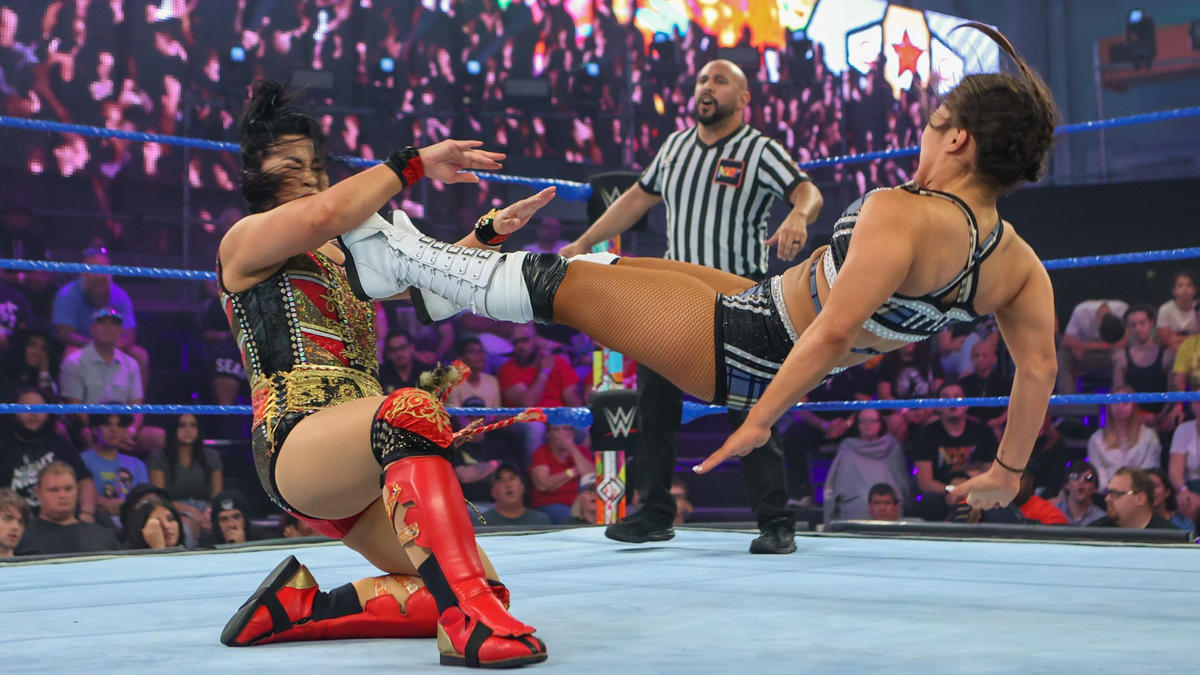 Meiko is leaning on the ropes, Roxanne runs with an uppercut, rolls over, running for another shot but Meiko kick her. Meiko carries Roxanne on her shoulders, Roxanne wiggles out then sweeps Meiko off of her feet with a Russian leg sweep and pin attempt. Roxanne wraps her legs around Meiko’s head for a submission, Meiko reverses then knees Roxanne’s face. Roxanne pushes Meiko to the ropes, on her way back, Meiko kicks Roxanne then climbs the top turnbuckle. She hits Meiko to stop her, she climbs the ropes, swinging at Meiko, Perez drops Meiko on the mat and goes for a pin, Perez is surprised that Meiko kicked out. 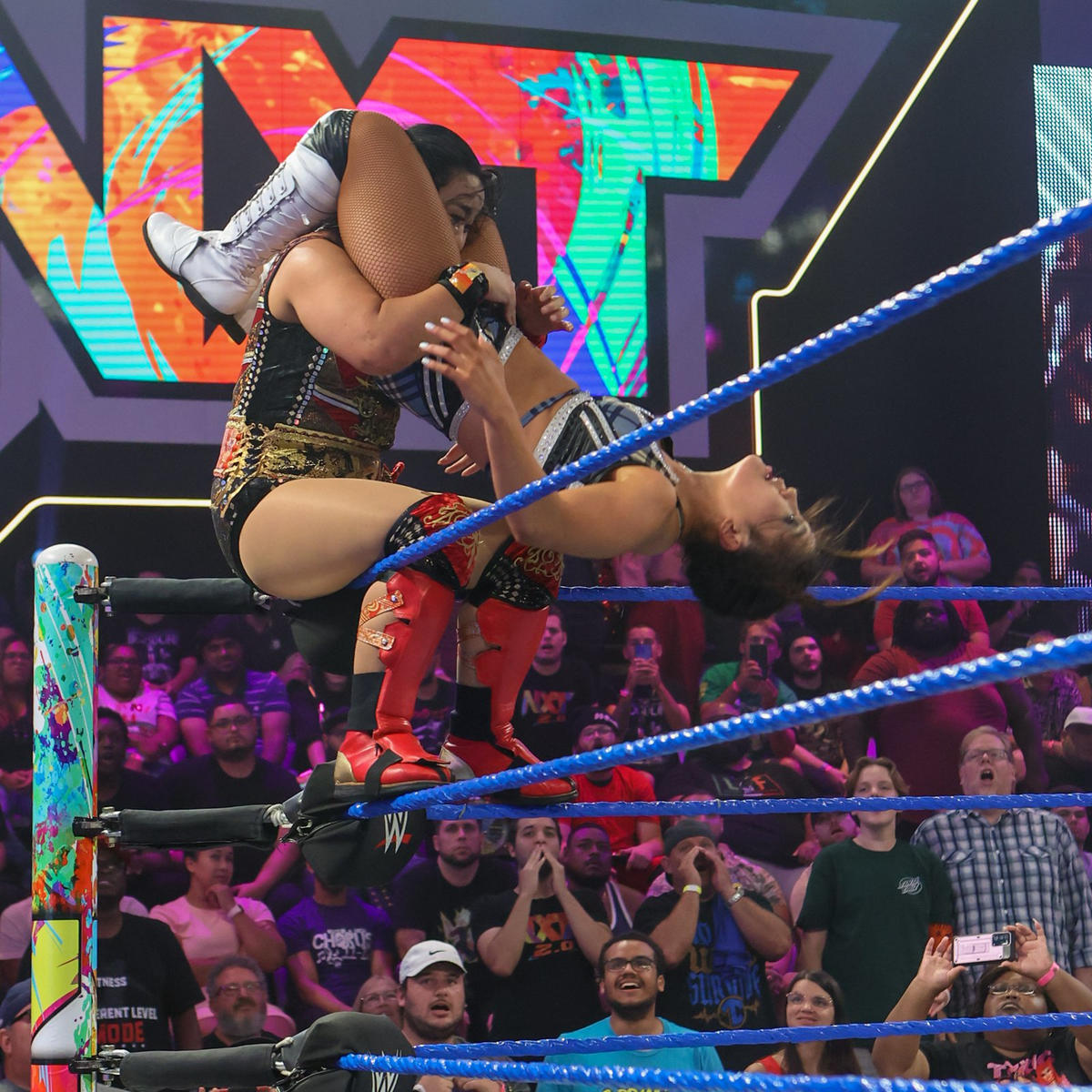 Roxanne drags Meiko by the hair to the middle of the ring, runs to the ropes. Satomura stops her with a kick, Roxanne hits Meiko who responds with an enzuigiri. Meiko runs to a corner then does the Scorpio Rising for the victory. 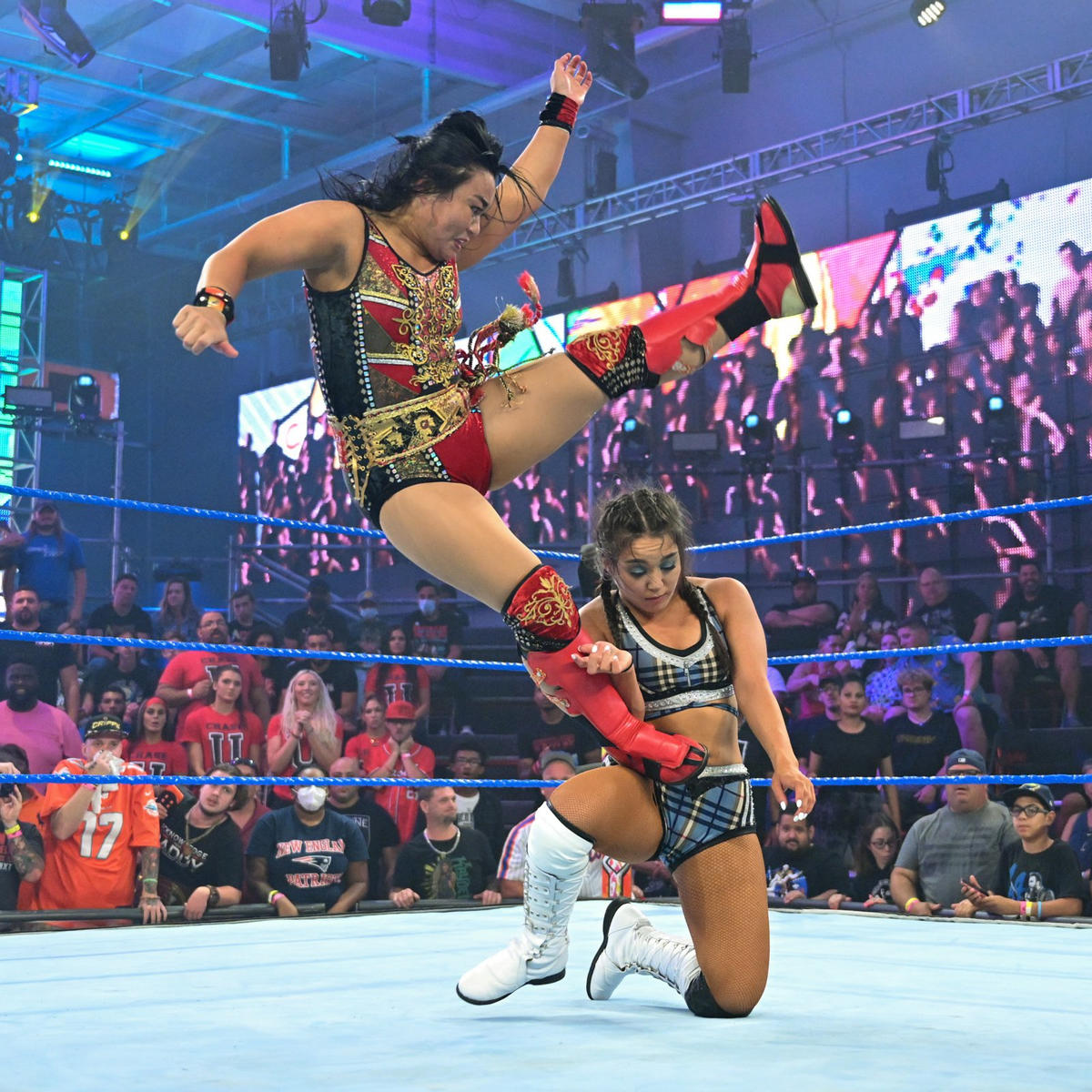 Meiko holds Roxane’s hands as they bow as a sign of respect, with Satomura exiting the ring, Cora appears from behind to hit Roxanne with her kendo stick. Cora runs away the moment Meiko returns to the ring. Meiko helps Roxanne stand up and they celebrate each other. 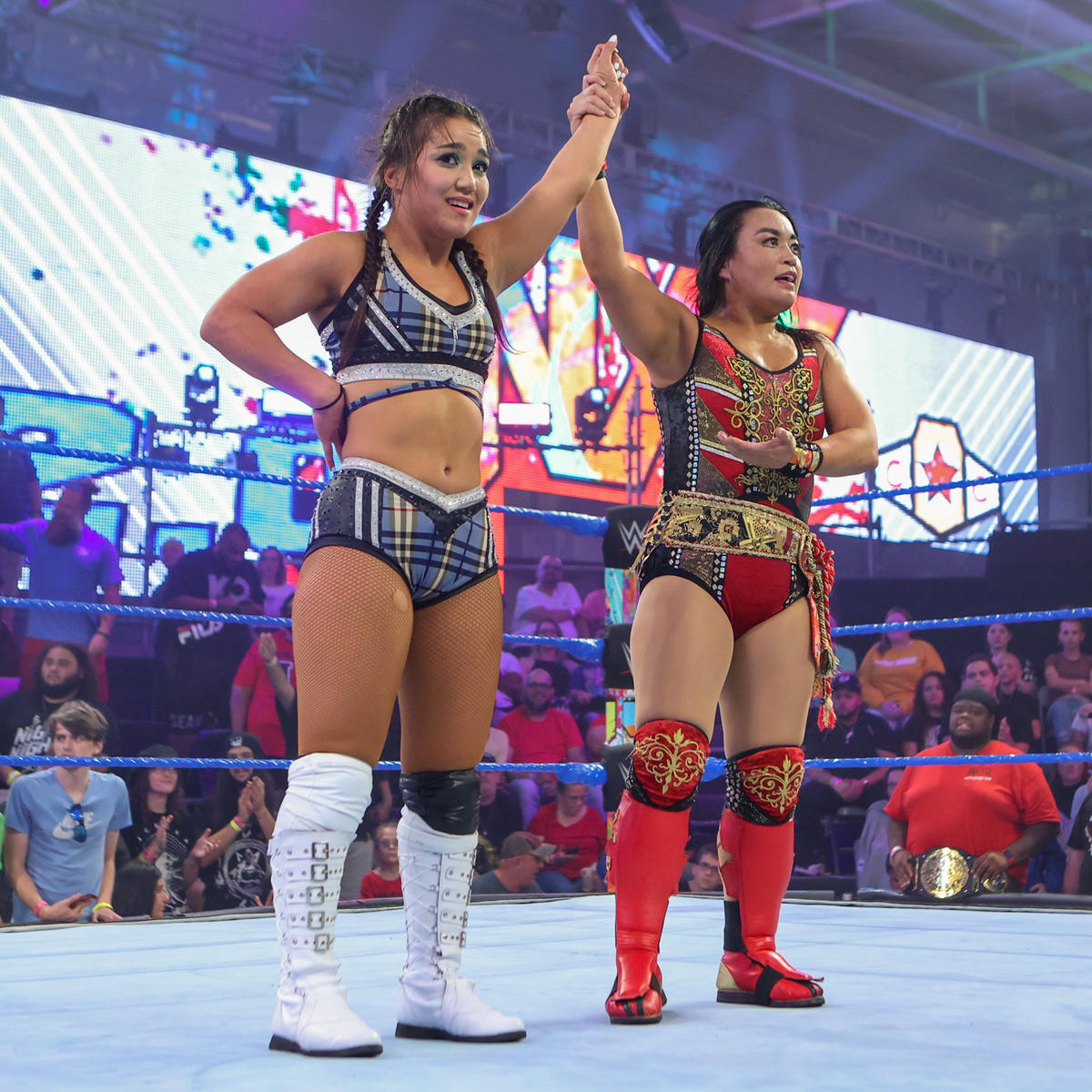 Before the fight started, they showed a backstage sequence in which Roxanne begs Meiko for a match and Cora declines because she already has one against Roxanne. First, it reveals that Cora and Roxanne are alike because they both wanted to challenge Meiko. It also fuels their rivalry. I liked that Cora attacked Roxanne from behind because it demonstrated that Meiko stated Roxanne is respectful and that Cora wants the spotlight. Their conflict isn’t done yet. I believe their next match should have some sort of stipulation since Cora has been using her kendo stick lately.

Jagger Reid and Rip Fowler are backstage, they stop Kiana James while she’s on the phone, they want to provide “guidance,” she asks her assistant to take one of the pins they gave her. She tells her, “I don’t do free sponsorships,” then tells her to throw away the pin. Kiana is again on the phone then Arianna Grace is talking, she said, “I would love to be everywhere at once unfortunately I must politely decline. I have a luncheon then a meet and greet and then I’m judging a beauty pageant.” Kiana tells Arianna that “she’s exactly what she’s looking for” as she has a problem with Zoey and Nikkita, Arianna tells her that she can’t stand either one of them either and she has a solution, asking her assistant to add a training with Arianna, Grace responds that she has an opening.

Even though we have seen her in NXT Lvl Up, we have a video package advertising Sol’s NXT debut with her arrival coming soon.

Mandy Rose will be at next week’s NXT 2.0 anniversary show, they announced this week.