Cora Jade and Roxanne are chatting, Indi is against the lockers and tells them “I once had a best friend and a love like you two have, those were the days. Little piece of advice from the old wiley veteran of the trio. Be careful, this place is crazy, you never know what’s gonna happen next.” Cora tells her she’s not much older than me, she’s not even 45. Roxanne replies, “Indi, you’re overcompensating, you’re not the third wheel as much as you might think you’re the odd woman out, we all have something in common.” Cora Jade joins, “We all despise Toxic Attraction.” I love seeing them become a team especially against Toxic Attraction, they have a connection and it’s cool to see them matching in all blue attires. 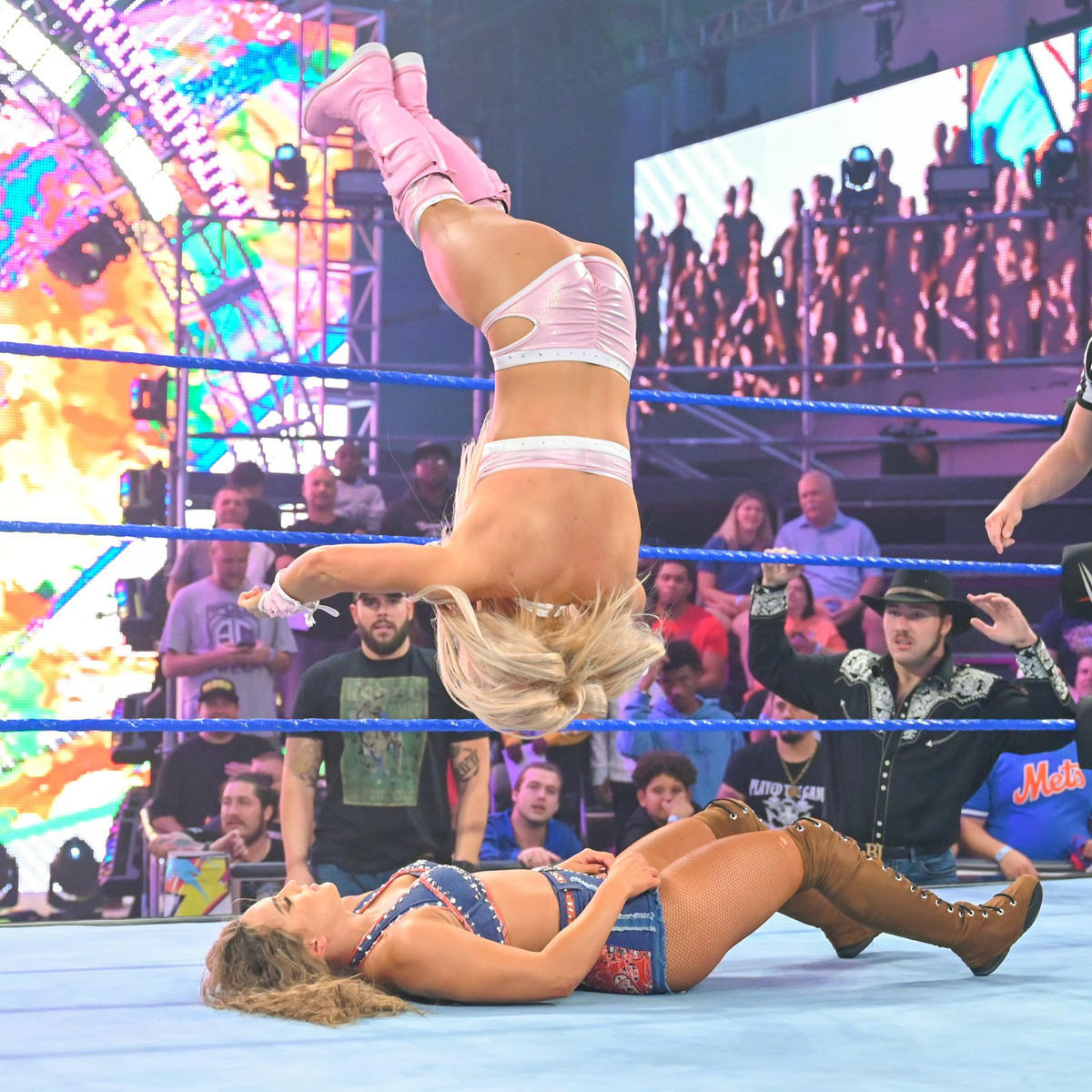 As Tiffany is doing her entrance, we can see Wendy bouncing on a bouncy ball towards the end of the entrance ramp, Tiffany doesn’t see her. This match definitely was a great way to showcase Tiffany’s progress in the ring, her top rope moves have been incredible. Tiffany was attempting a fallaway slam but noticed Wendy bouncing on the ball by ringside. Stratton went to tell her to leave when Wendy tossed confetti at Tiffany’s face. With the distraction, Fallon was about to roll up Tiffany for the win. 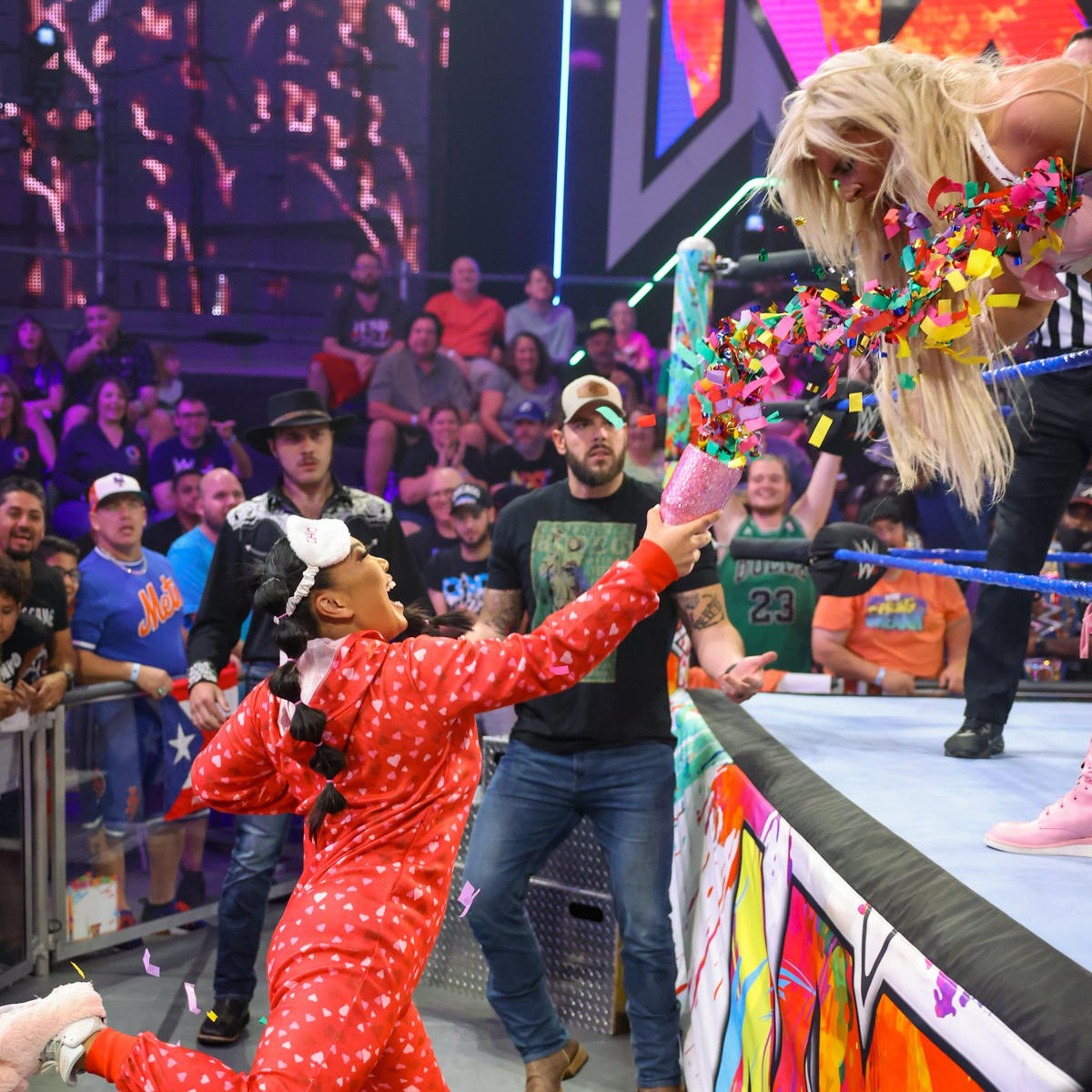 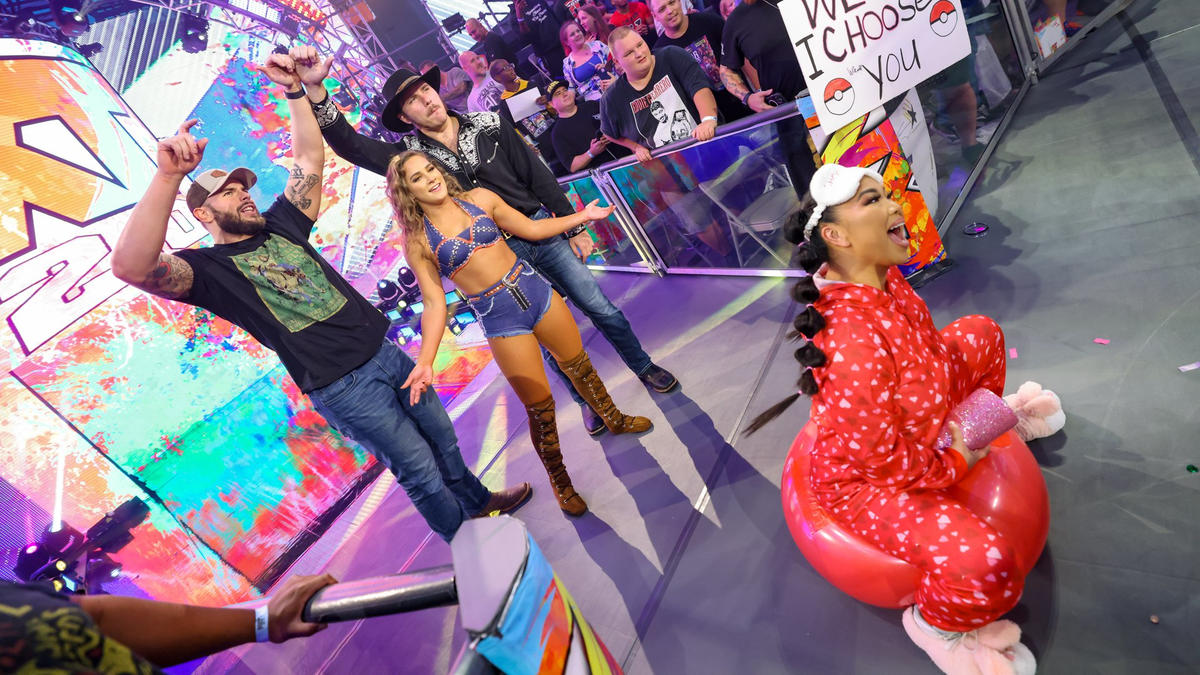 Lash delivered an incredible promo, it reminded me that I miss watching Lashing Out. Her mic skills are great, she should definitely do promos more often. My favorite part was her listing her accolades, they haven’t told us about that part of her character, and I am very glad they did.

The ladies were chatting with Sanga when they were interrupted by Xyon, Sanga told them he found his next opponent. I wish we could see more of the ladies as a team on screen.

It was a simple promo from Nikkita, makes me wonder how she’ll fit in the division now that Roxanne has been added to the Toxic Attraction and title picture.

Toxic Attraction has a promo about their main event against Cora, Roxanne and Indi saying how “misery loves company” that’s why Indi has joined Cora and Roxanne.

Tatum and Paxley and Diamond Mine Backstage Segment

Tatum is on the phone, she’s interrupted by Ivy telling her she’s doing better, to keep going. She leaves and Roddy along with Damon Kemp tell Ivy she shouldn’t be talking to Tatum, that she’s been feuding with her for the past four months, they shouldn’t be friendly.

McKenzie chats with Von about his loss last week and his upcoming match against Brooks Jensen. Stone interrupts, telling McKenzie Jensen will win if he lies or cheats against Wagner. Sofia also interrupts saying that it won’t ever happen again since the match next week is one on one, Sofia, Stone, Fallon and Briggs aren’t allowed at ringside, she says Von will show his dominance. I keep thinking Stone will be removed this group very soon and Sofia will remain as the mouthpiece for Von moving forward. They haven’t shown much from her character aside from her accompanying Von to his matches or interviews like this. 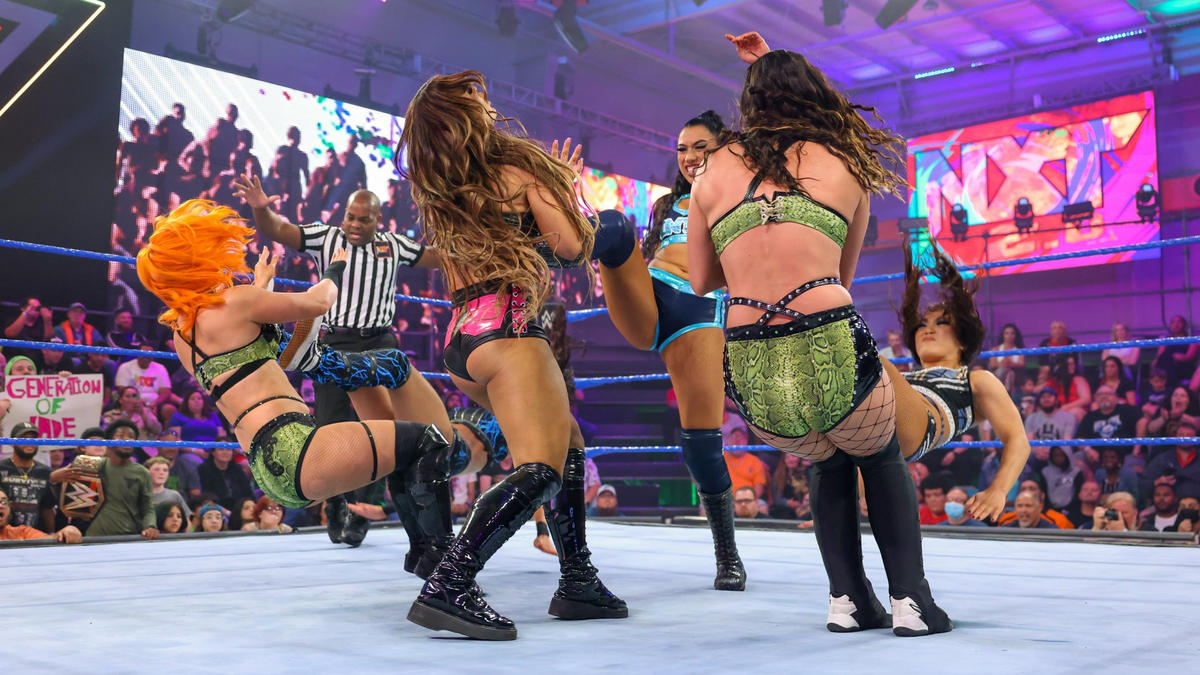 I loved the chemistry between both teams, Indi fits so well with Cora and Roxanne. Indi, Cora and Roxanne quicken the pace of the match, it felt a lot longer than what it was. I loved being able to watch more from Jacy as she is often not featured as much as Mandy and Gigi. Mandy and Cora are facing each other, Jacy and Gigi attempt a distraction, Cora is able to take care of them then concentrating back on Mandy. Gigi and Roxanne are facing, Roxanne has a few combinations moves on Dolin. She hits Dolin with an elbow in the corner, running back for a second one. When Roxanne goes for a pin, Jacy lands on top of Roxanne to break it up, Indi takes her to the outside.

Rose attempts to take Indi to the outside, but she lands on her feet instead. Rose is about to focus on Roxanne when Indi returns inside, Indi takes care of Mandy and sends her outside. Jacy is climbing the turnbuckle post, Indi intercepts her and pushes her outside again. Indi is about to make a move; Mandy takes her by her feet and slips Indi outside. Indi clotheslines Mandy by the fans, Roxanne super kicks Gigi, Cora Jade is on the apron, Roxanne goes for the tag. Cora goes for a senton, Gigi is screaming, Cora tags Roxanne. Perez notices something is going on, carefully rolls Gigi to pin her while not pressuring her. Roxanne was very professional during the ending; she took care of Gigi while also finishing the match as planned and the referee checks on Gigi.

Promo is aired to hype Blair’s return to NXT UK, she warns more “bad things will continue to happen.” 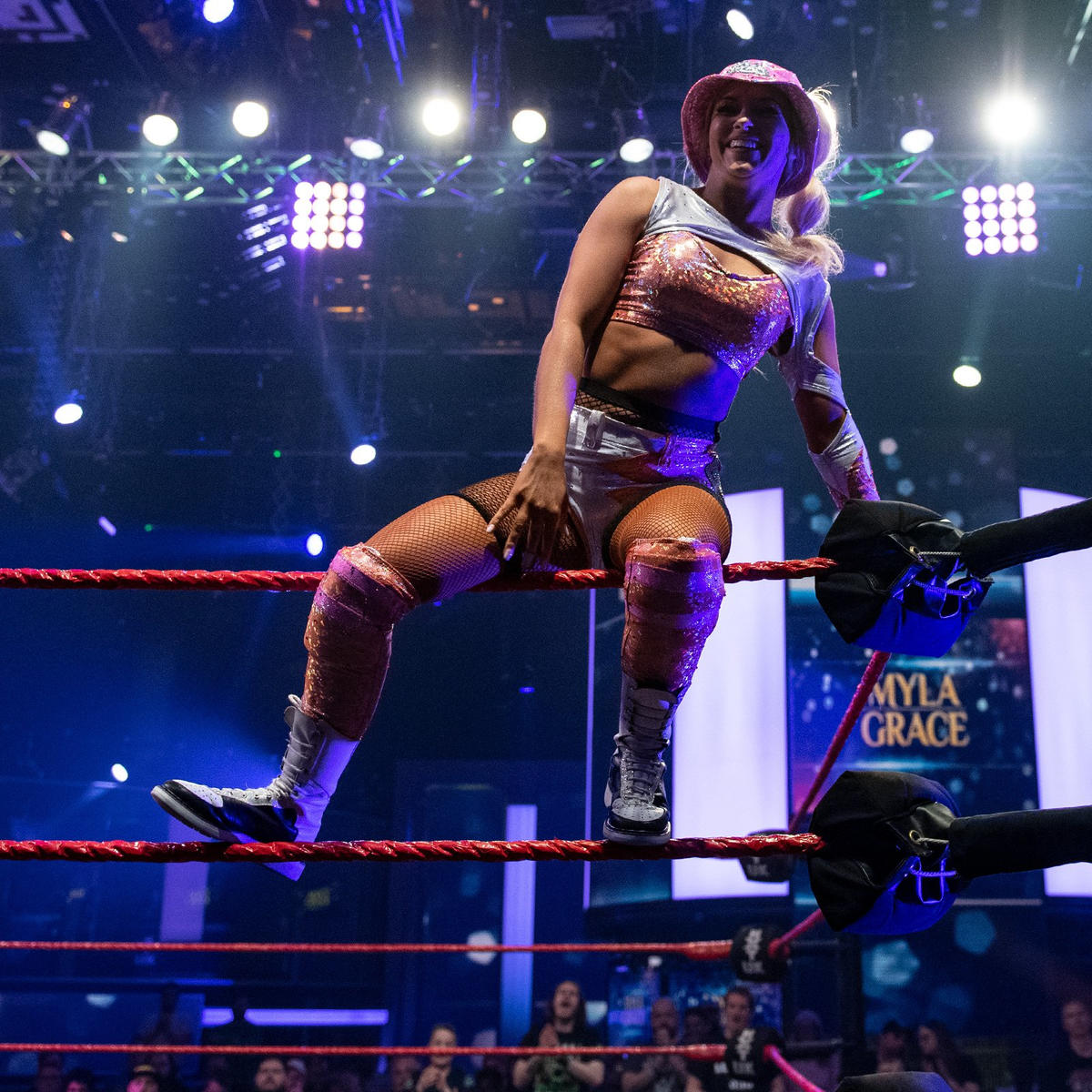 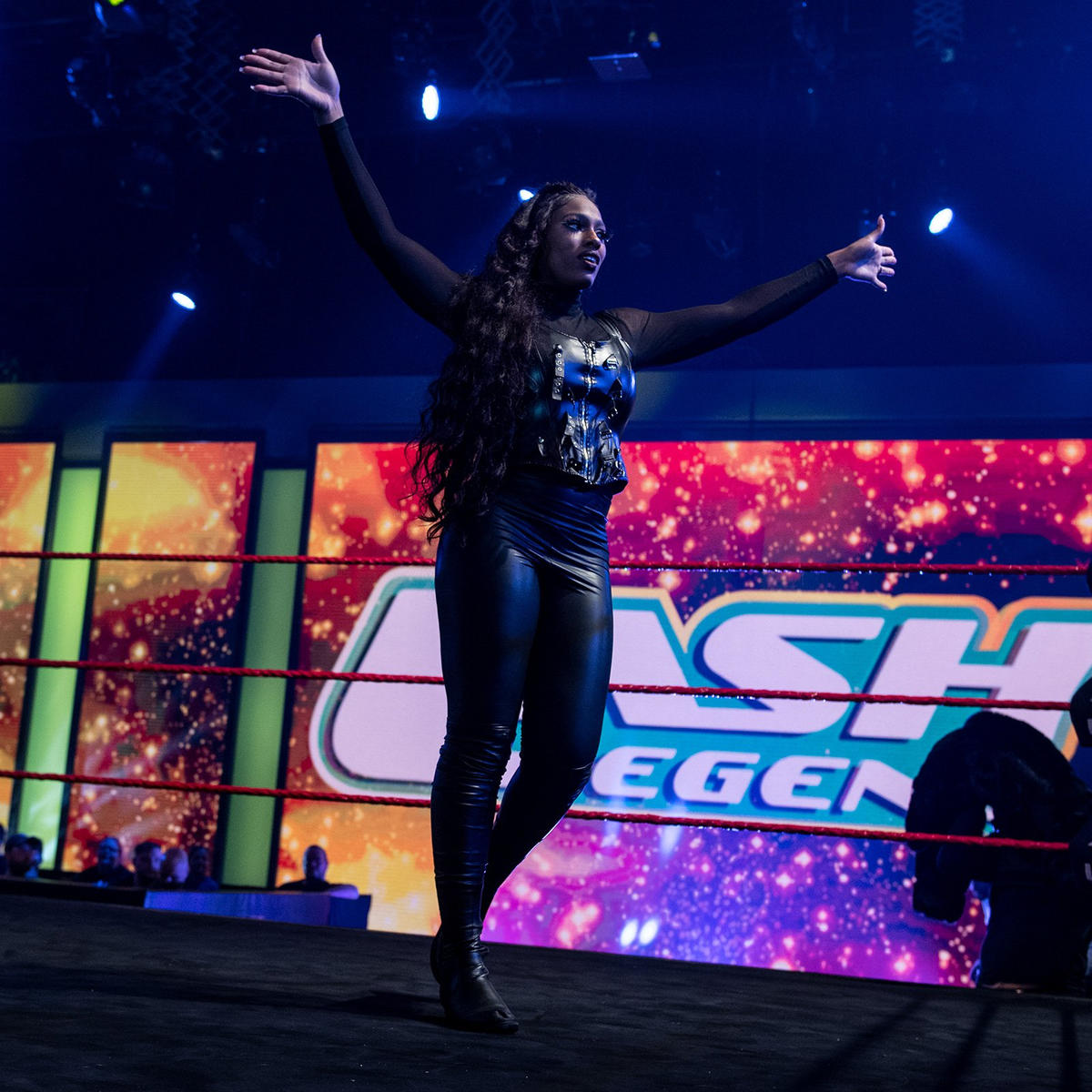 Lash showing off her confidence starting with her entrance. Legend showed off her power from the start of the match, Grace ran to the ropes for a quick maneuver, but Lash was able to stop her. Grace tried to use her momentum to pin Lash, but Lash sat on her knees to pin Grace’s shoulders. Lash is able to carry Grace, who uses the ropes to stop Lash from doing anything further. Lash holds Grace down, runs to the ropes for an uppercut on Grace who lands on the outside and is clutching her knee.

Grace uses the ropes to create separation between them and have the opportunity to be inside the ring while Legend recovers. Grace attempts a top rope move when Lash catches her, carries her and begins to move and back and forth in the ropes then throws Grace overhead. Legend carries Grace over her head, showing her strength and confidence. She has Grace on her knees while she’s bending her while mocking her. Grace attempts a huracanada but it barely has an effect on Lash then Grace does as drop kick that takes her down. Lash goes for a big boot, going for the pin and the victory. 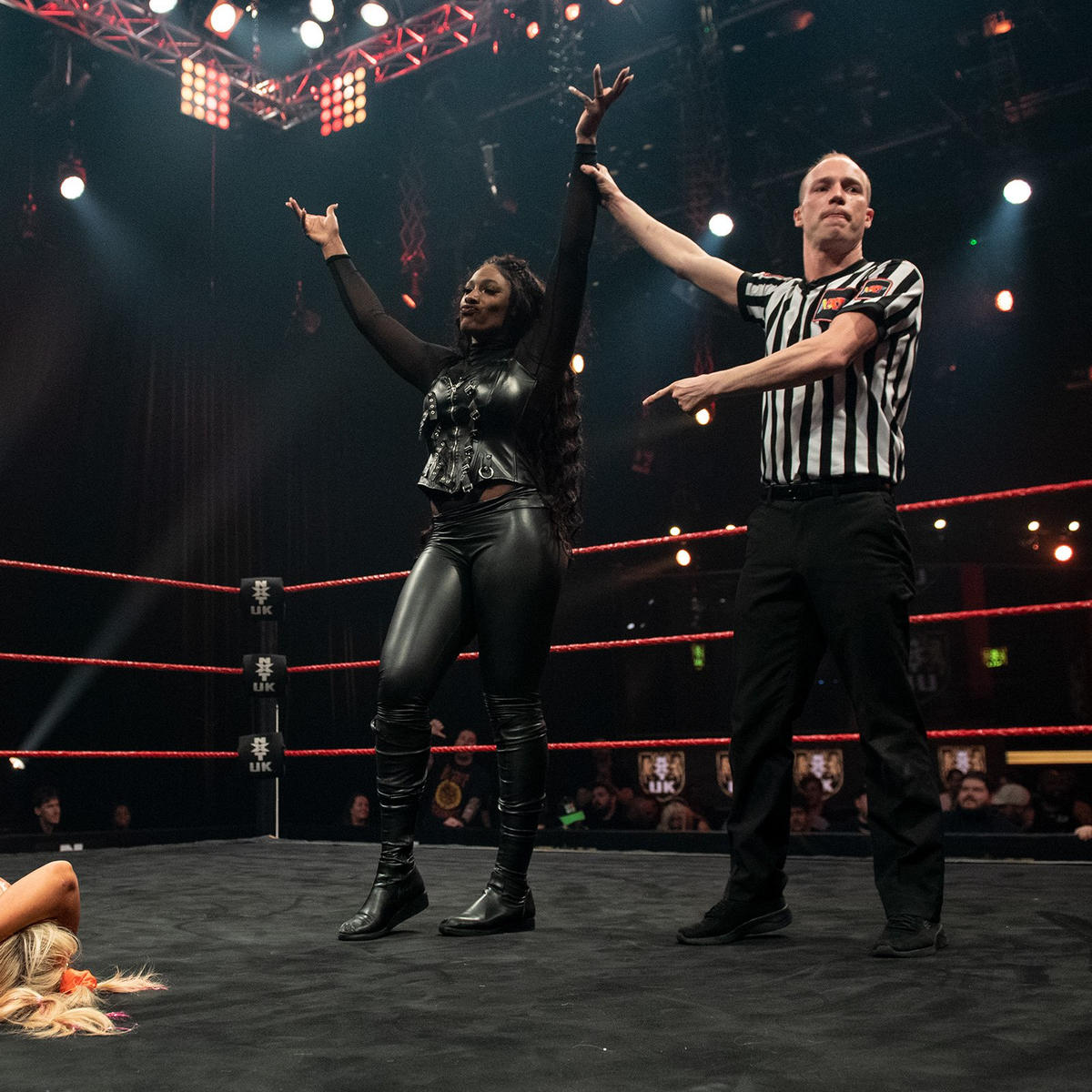 Sarray announces that she’s coming to NXT UK next week and is looking forward to her matches with the roster.

The group announces they’ll be in NXT UK as well, Briggs and Jensen going for the tag team championship and Fallon is excited to mix it up with the women’s division. Fallon ends the promo by saying, “Let’s kick some ass.”