This week’s NXT 2.0 featured a lot of their women as they usually do between having multiple women’s matches and one mixed tag team match. A total of 21 women were on screen from the introduction of the participants of the Women’s Breakout Tournament to Toxic Attraction powering the women’s division. 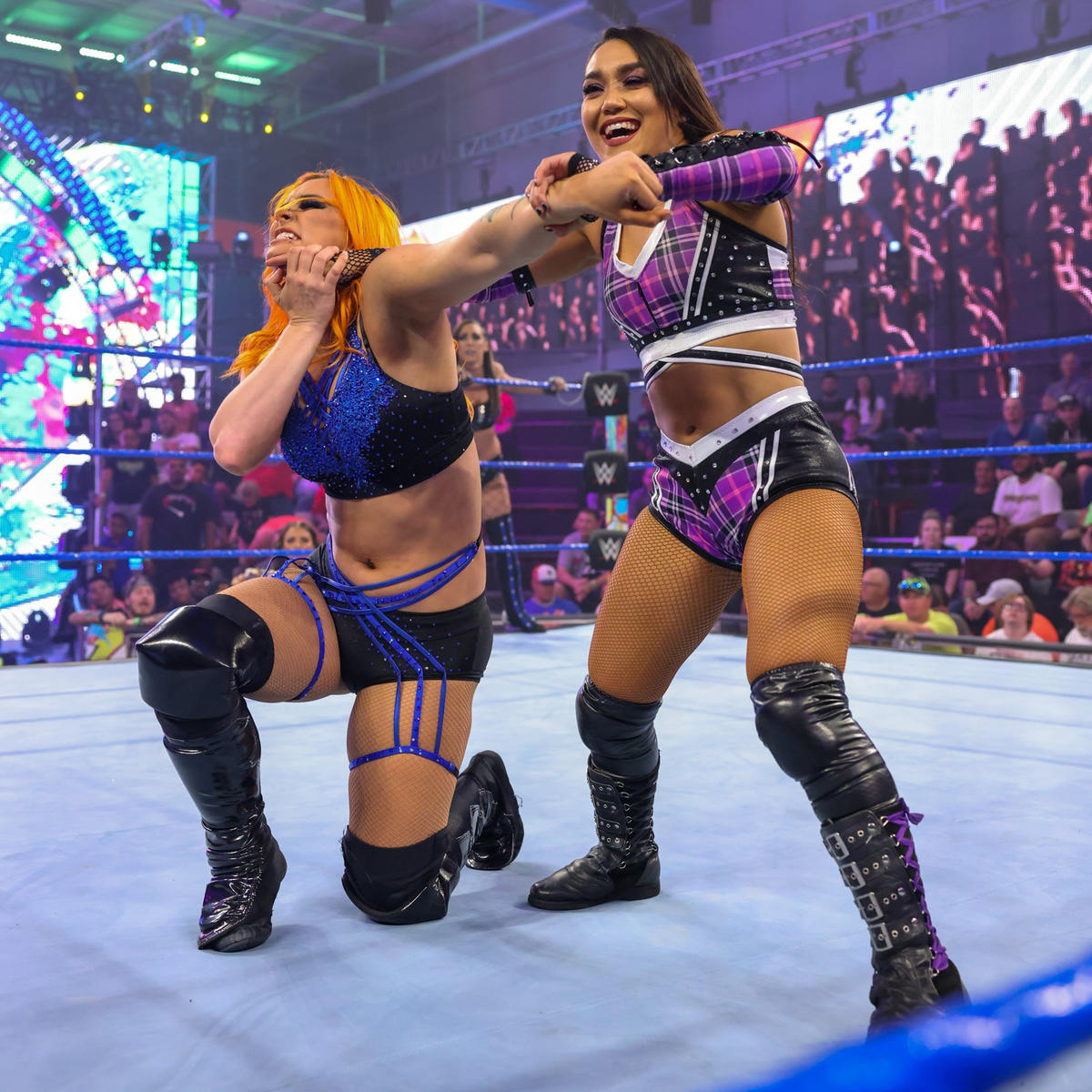 The show opens with the Women’s Tag Team Championship, I loved the double team moves executed by both teams and their chemistry. I loved it when Choo held the ropes open for Perez to dive onto Toxic Attraction. For a while, Toxic Attraction is in control of Perez while Wendy can only watch from the apron. Then, Wendy gets the hot tag, Toxic Attraction then takes control then Mandy Rose comes in to distract Choo. Perez is setting up for her finisher on Gigi but Jayne superkicks her, and Dolin rolls her up for the victory. Toxic Attraction wins, and Wendy starts to attack them but Mandy hits Choo with her championship from behind. Toxic Attraction joins to attack, they stand above Choo as they celebrate. Very enjoyable match, a great choice for an opener, made me wonder who will really dethrone Toxic Attraction and end Mandy Rose’s reign? 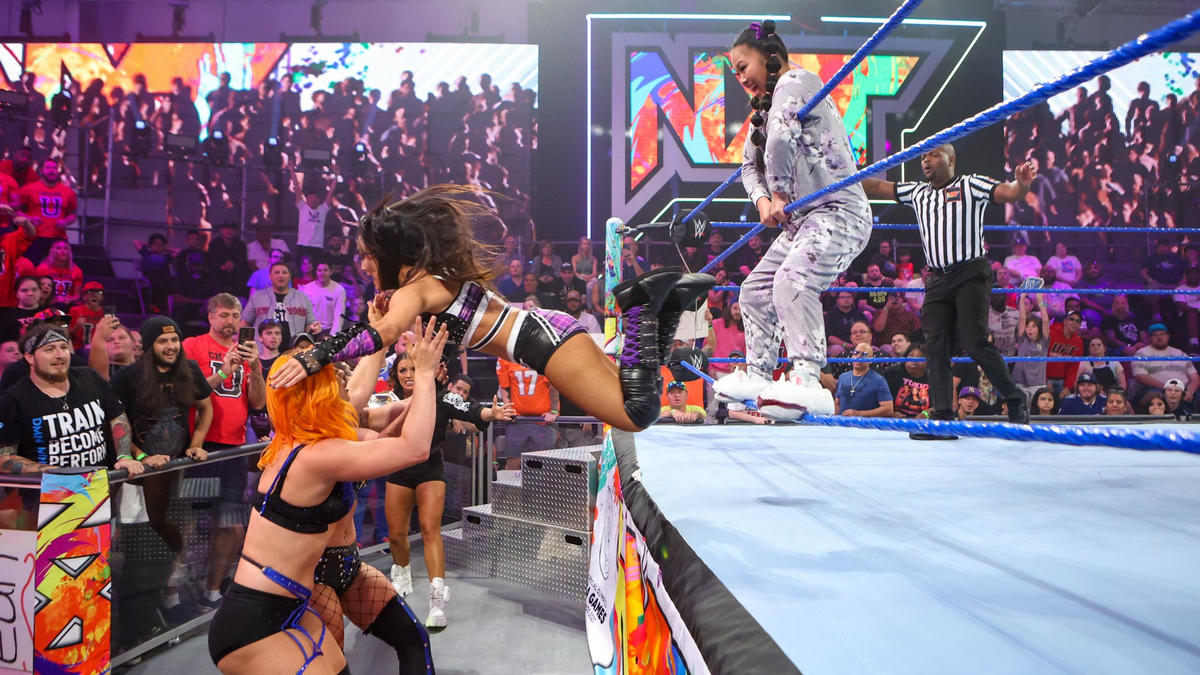 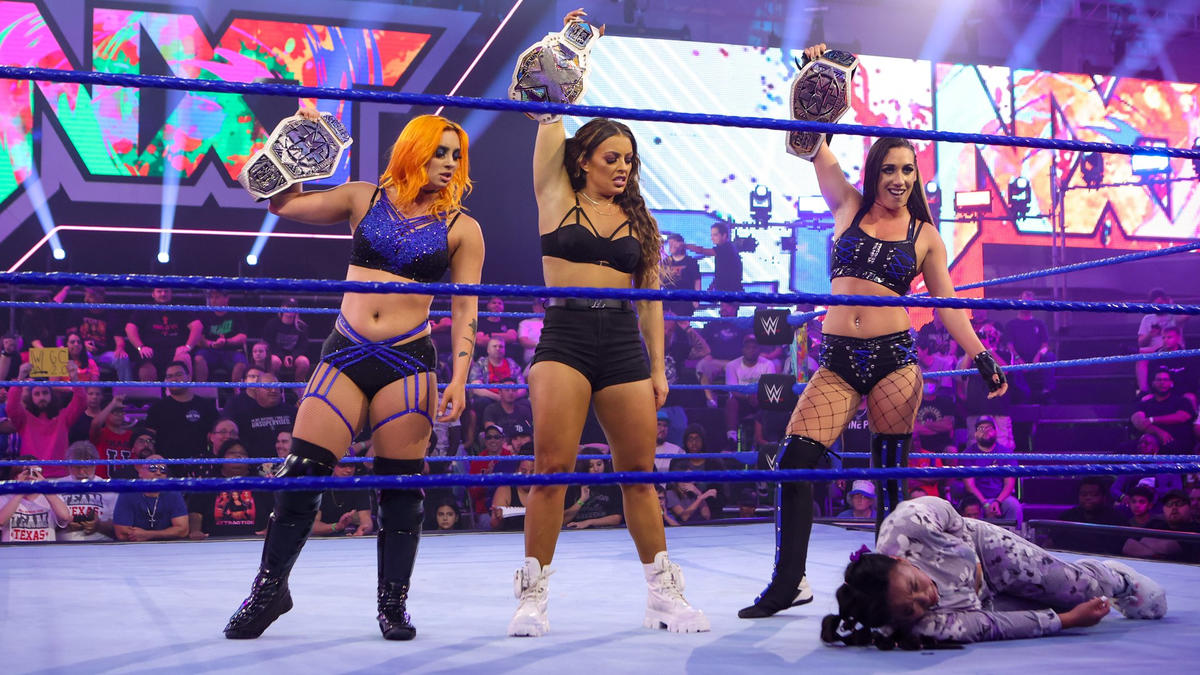 Tiffany is shopping along with Grayson as they both discuss their rivalries against Sarray and Andre Chase. Grayson said he can’t wait for his match and Tiffany tells him she’d be there for it.

When the Ivy Nile Challenge was announced, I thought it would be an open challenge for her to take on any person wanting to face her. We are shown a group of men in the Performance Center as Ivy introduces them to various challenges, she states that only “one will stand tall.” We see her segments throughout the night from doing Burpees to Push-Ups as more men began to quit as the night progressed and she was the only one standing tall. I liked how they used Ivy as it was a way to bring her on-screen without her wrestle and while they figure out what to do next with her.

Andre Chase and Bodhi are getting ready backstage when Sarray walks in. She began to speak in Japanese, Andre tells her that he doesn’t understand and Bodhi translates. Bodhi tells Andre that Sarray has the idea to turn his one-on-one match against Grayson Waller into a mixed tag match. Chase tells Bodhi he didn’t know Bodhi knew Japanese, Bodhi replies he’s taking the course in Chase U when Chase replies he didn’t know they had a Foreign Language department.  We get confirmation that Andre and Sarray will team up against Tiffany and Grayson. This segment was fun to watch, I thought the last match between Sarray and Tiffany meant the end of their rivalry so this surprised me to see them still facing each other. Based on the result, I believe we’ll be getting another match between these two.

We are introduced to the competitors for the Breakout Tournament which are Roxanne Perez, Nikkita Lyons, Kiana James, Lash Legend, Tatum Paxley, Sloane Jacobs, Arianna Grace, and Fallon Henley. (Pictured below) 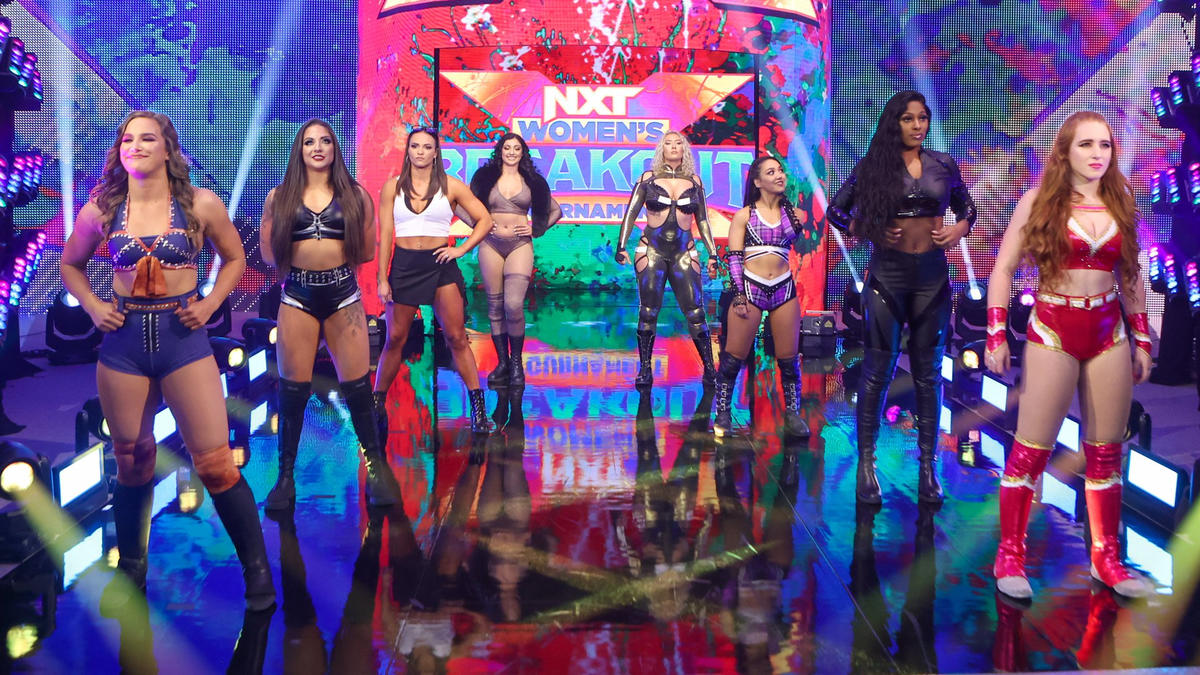 Fallon Henley takes down Sloane Jacobs, controlling her for a while until Jacobs hits her with a dropkick. Brooks and Jensen arrive at ringside to cheer on Fallon. Henley celebrates with them as she took over and took down Jacobs. Fallon hits Sloane with an elbow and pins her for the victory. Fallon advances, celebrating with Brooks and Jensen, embracing Sloane after the match, and raising Sloane’s arm.  Overall, it was a good way to introduce Sloane Jacobs to the audience and to further the storyline with Fallon, Brooks, and Jensen. 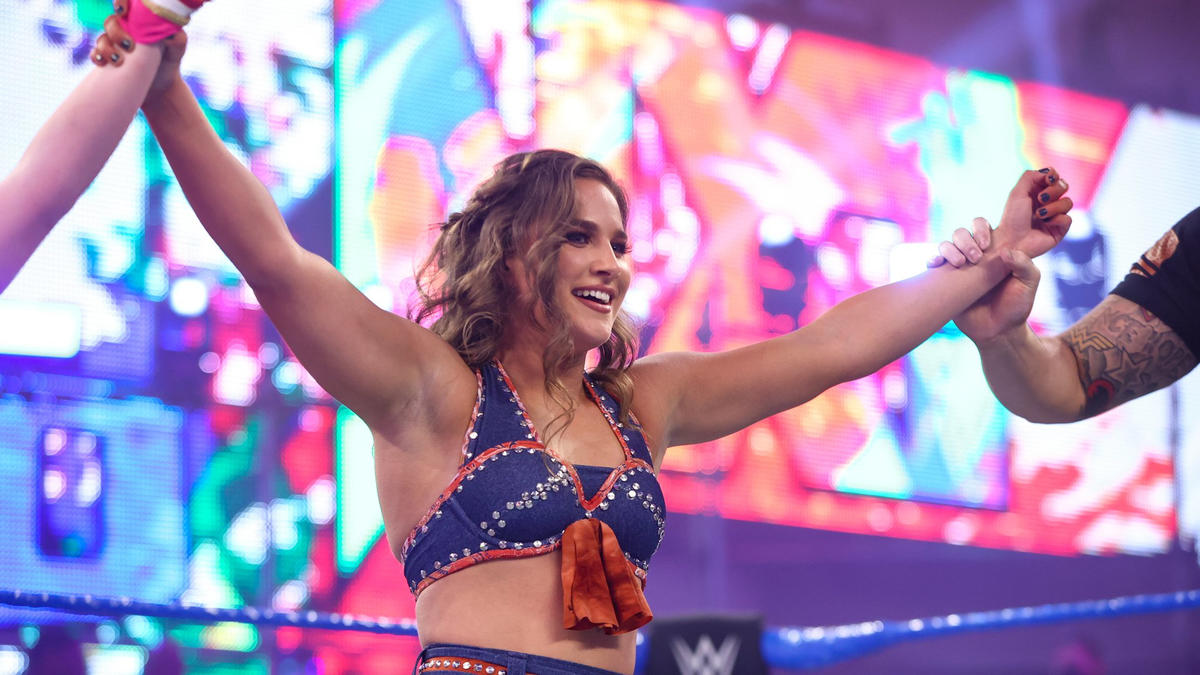 Santos tells the group that Tony has his attention, and tells Del Toro (formerly Raul Mendoza) to get in the car. Later on, Joaquin, Santos, and Elektra are going to the car when they notice the door is open, Del Toro nowhere in sight. Joaquin asks Elektra if Del Toro texted her, Santos knows this was Tony’s doing. He calls Tony, they have a back and forth and they decide to face each other.

Alba and Amari have a few hard-hitting exchanges, Alba hits Amari with a swinging DDT followed by a superkick. Alba hits Amari with the Fire Bomb, then a dive, pinning Miller for the win. I really loved how the commentary gave us a back story about Kay Lee Ray having this name change to Alba Fyre. I was happy to see Amari wrestle, I didn’t think she’d be facing Alba so I thought she’d get a victory until I realized she was facing Alba which meant it would be a way to introduce this new fiery side of Kay Lee Ray. I hope Amari gets another opportunity like this one as she was able to show off more of her in-ring ability. 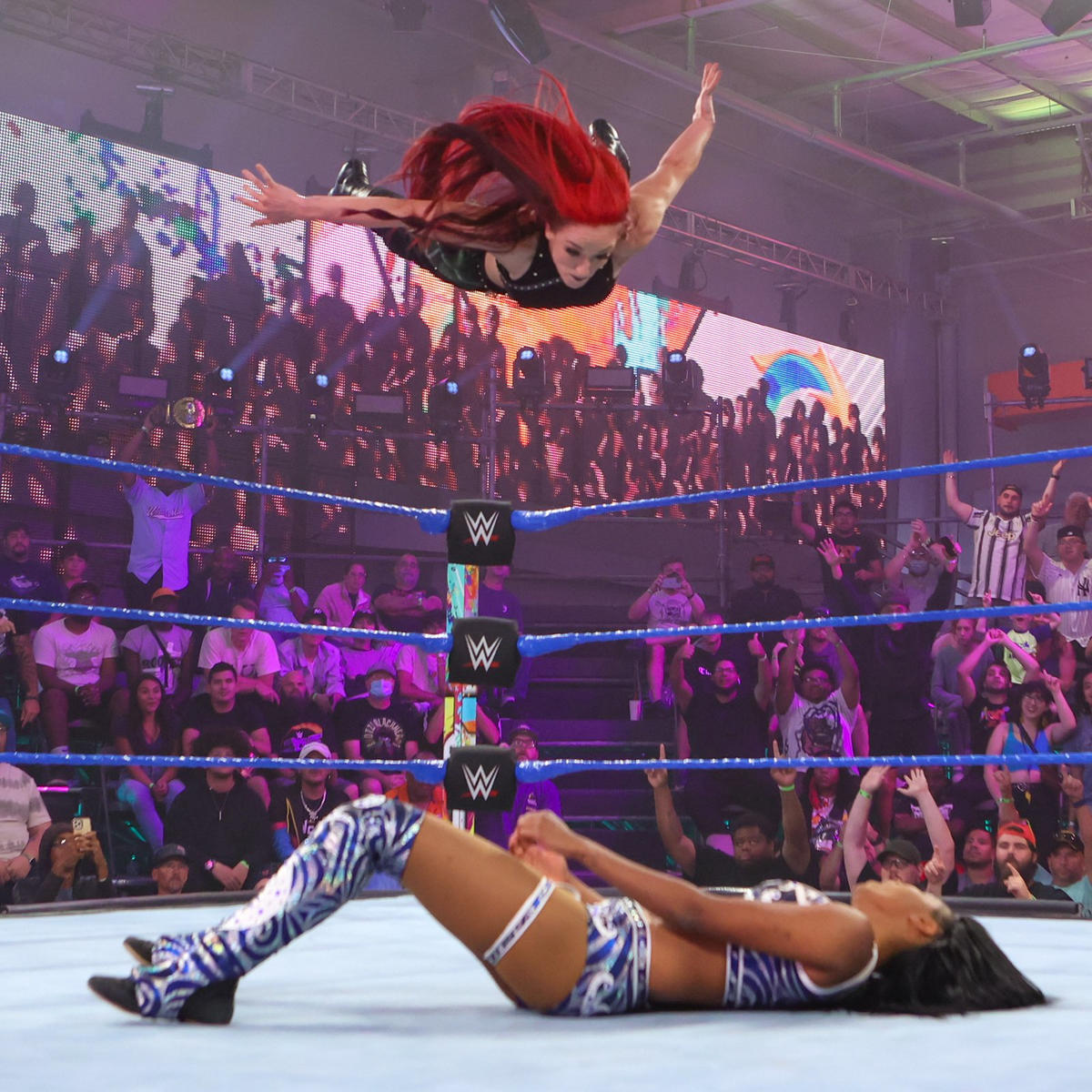 Grayson Waller and Tiffany Stratton vs. Andre Chase and Sarray

Before the match begins, we get the entrance for Sarray, Andre, and Bodhi. Sarray transforms but so do Andre and Bodhi. Andre’s shirt changes to a light blue, Bodhi has a short black hair wig and a Chase U red crop top. Tiffany and Grayson have matched the color of their gear too, it was a nice detail. It was very funny to start the match after seeing this transformation. Grayson and Andre open the match, Andre takes over and Grayson takes the opportunity to tag in Tiffany. She takes down Sarray, then Andre and Sarray take control again. It was an overall fun match, towards the end, Tiffany goes for the pin and Bodhi blows the air horn which causes a distraction, Tiffany dives to land on him. Tiffany returned to the ring and got rolled up. Andre and Sarray win the match. 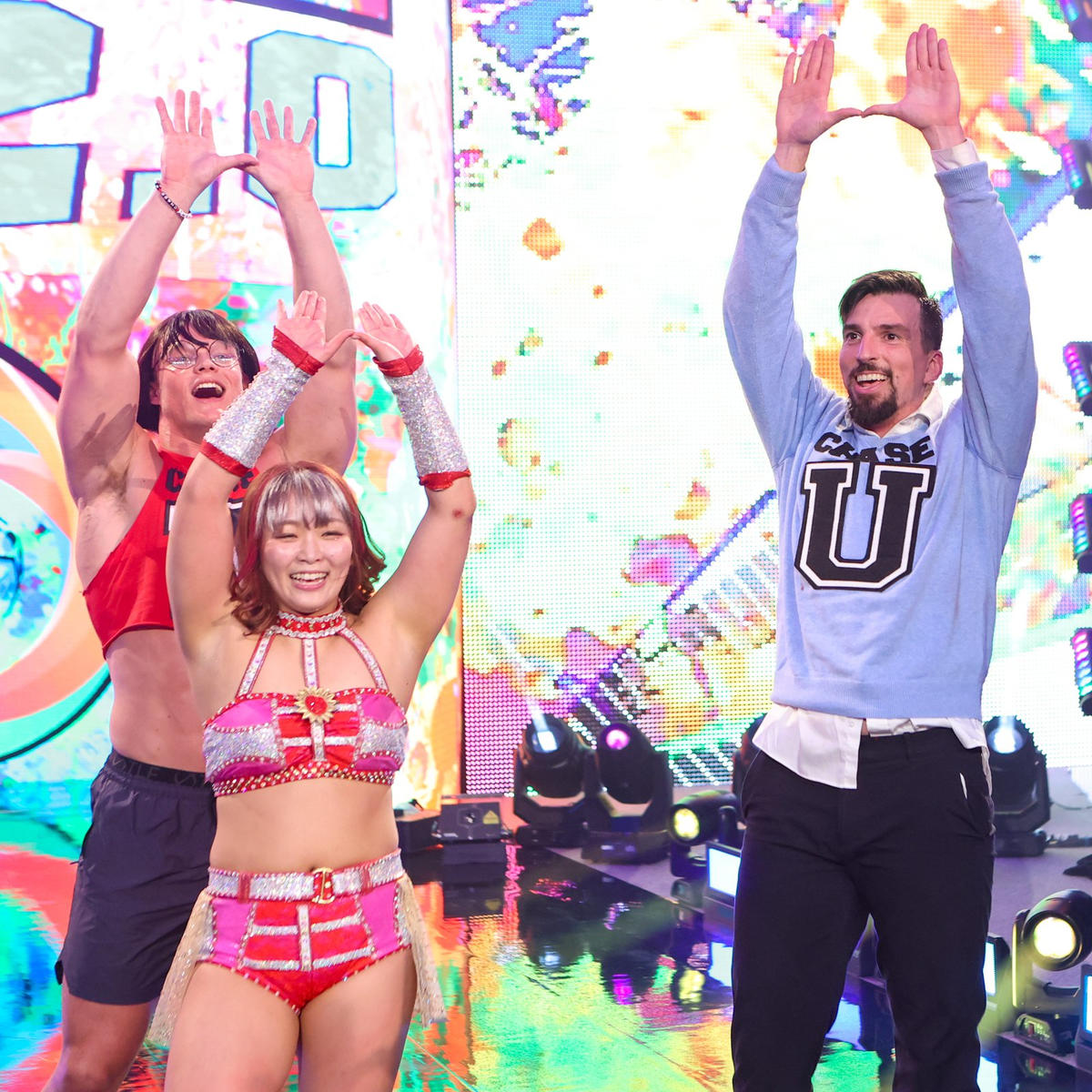 Toxic Attraction is making fun of Indi for her “man leaving,” Mandy tells her she’d never know how that feels which upsets Indi.

Arianna slaps Nikkita which causes a reaction from the crowd. Lyons takes down Grace but not for long, Arianna takes control of Nikkita for a bit. Lyons hits Grace with a few kicks, a German suplex, and a kick for the pin. Nikkita moves on in the tournament. I liked the way Arianna was introduced especially against Nikkita who has gained popularity since her debut. 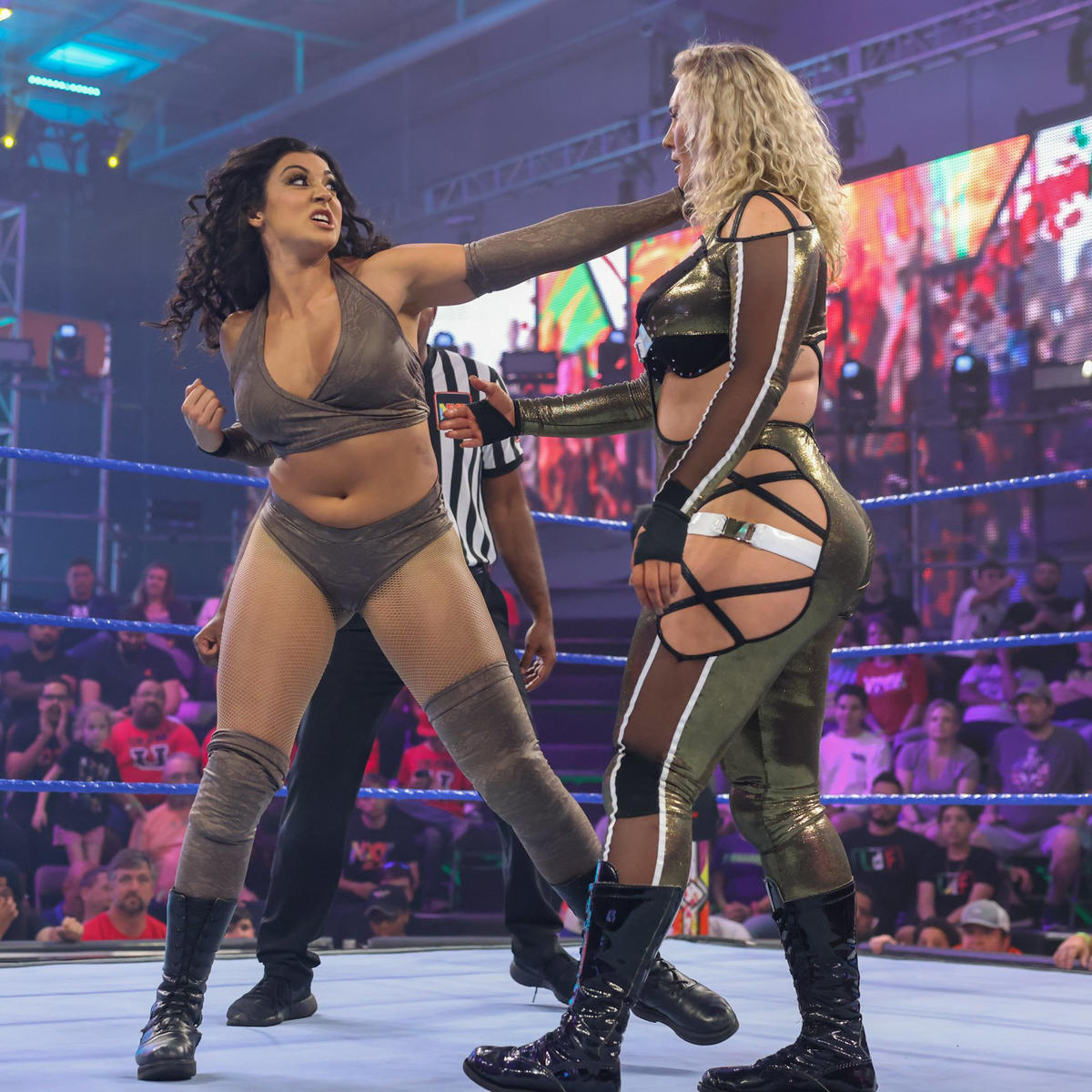 Natalya and Cora begin with a good back and forth, Natalya looks impressed by Cora’s offense. Cora attempts a Sharpshooter on Natalya but she breaks it. Natalya takes control for some time until Cora hits Natalya with a drop-kick. Jade goes for the pin, and Natalya kicks out at two. Natalya is in constant offense against Cora or reversing her moves. Cora attempts another Sharpshooter on Natalya but her knee gives out, she lets go and Natalya put her in the Sharpshooter. Jade is passed out, and the referee calls for the bell, giving Natalya the victory. Natalya reacts that Jade didn’t officially tap out, she goes to shake her hand, and they embrace as the show ends. I’m really glad Cora had the opportunity to face one of her idols, earning her respect too. I wondered if this means that Nikkita will be the next one to face Natalya after their recent encounter backstage. Overall, this is another match I enjoyed, it’s nice to see Natalya coming to NXT to help highlight and showcase NXT’s women’s division. 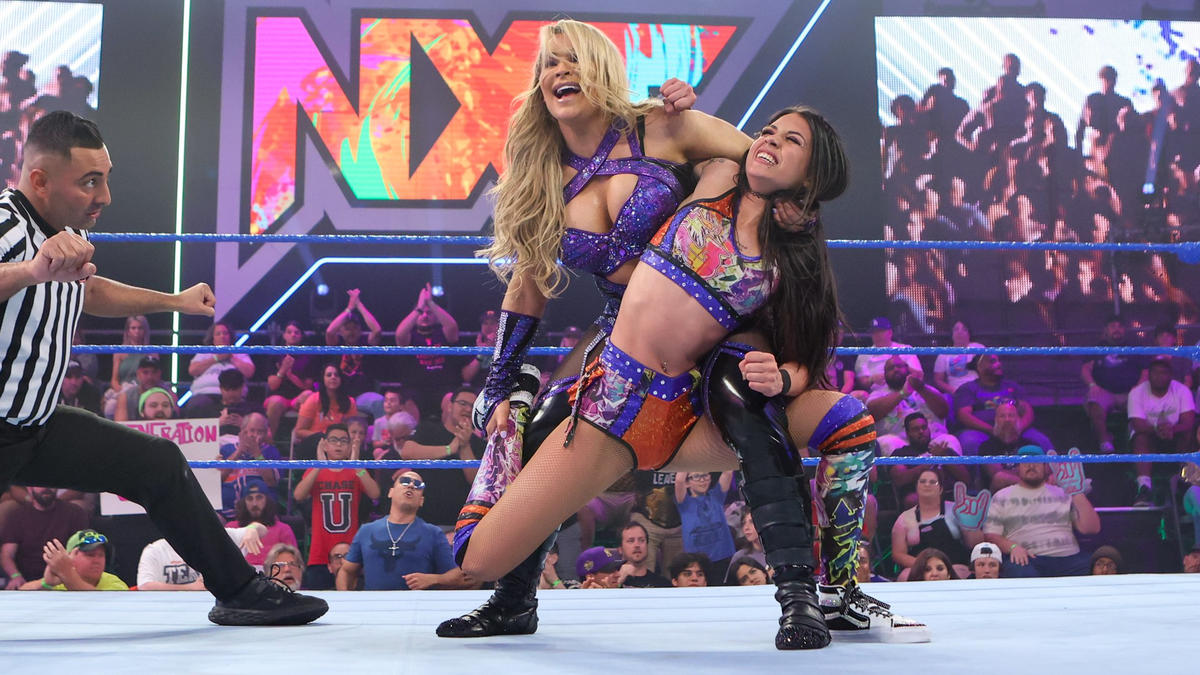 Emilia is asked backstage about Meiko’s title defense, when she’s about to answer, she is interrupted by Lash Legend from NXT. Emilia says all Lash does is talk and talk, Lash says she has no time for this and leaves. 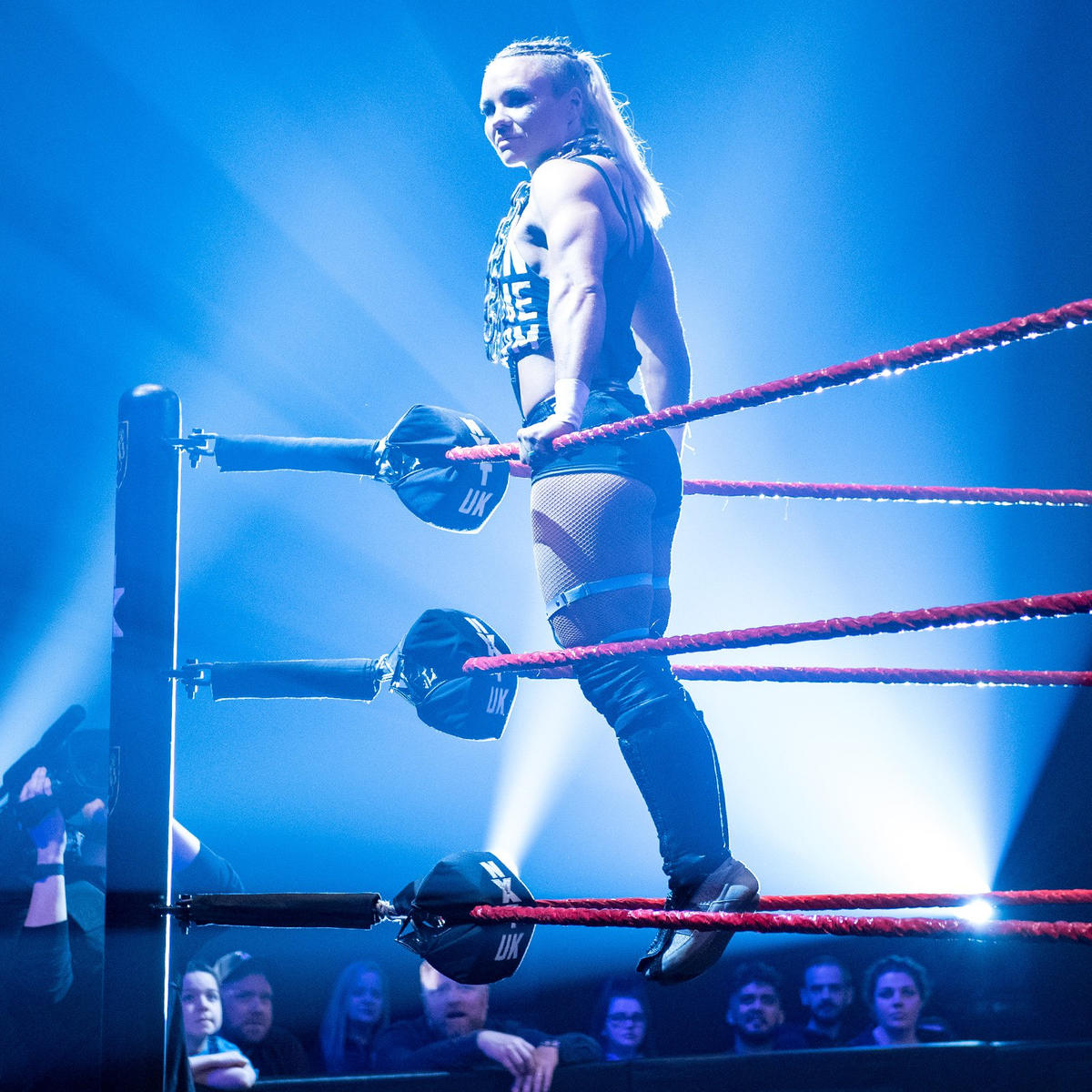 It’s Ivy’s NXT UK debut, Nina does head scissors which Ivy escapes from. Ivy reverses it with head scissors of her own while she does push-ups, very impressive. Ivy reverses it to do it from another angle while doing her push-ups again. Nina uses the ropes to escape from it, standing by the apron to cause distance between herself and Ivy, the referee also backing Ivy from Nina. Nina mocks Ivy by doing push-ups of her own. Nina begins to work on Ivy’s neck, Ivy kicks Nina multiple times. Ivy is on top of the turnbuckle, and Nina slaps her, Ivy applies a Dragon Sleeper and flipped from the top rope to a facebuster then applying a submission, Nina taps out. It was such an impressive debut for Ivy in NXT UK. 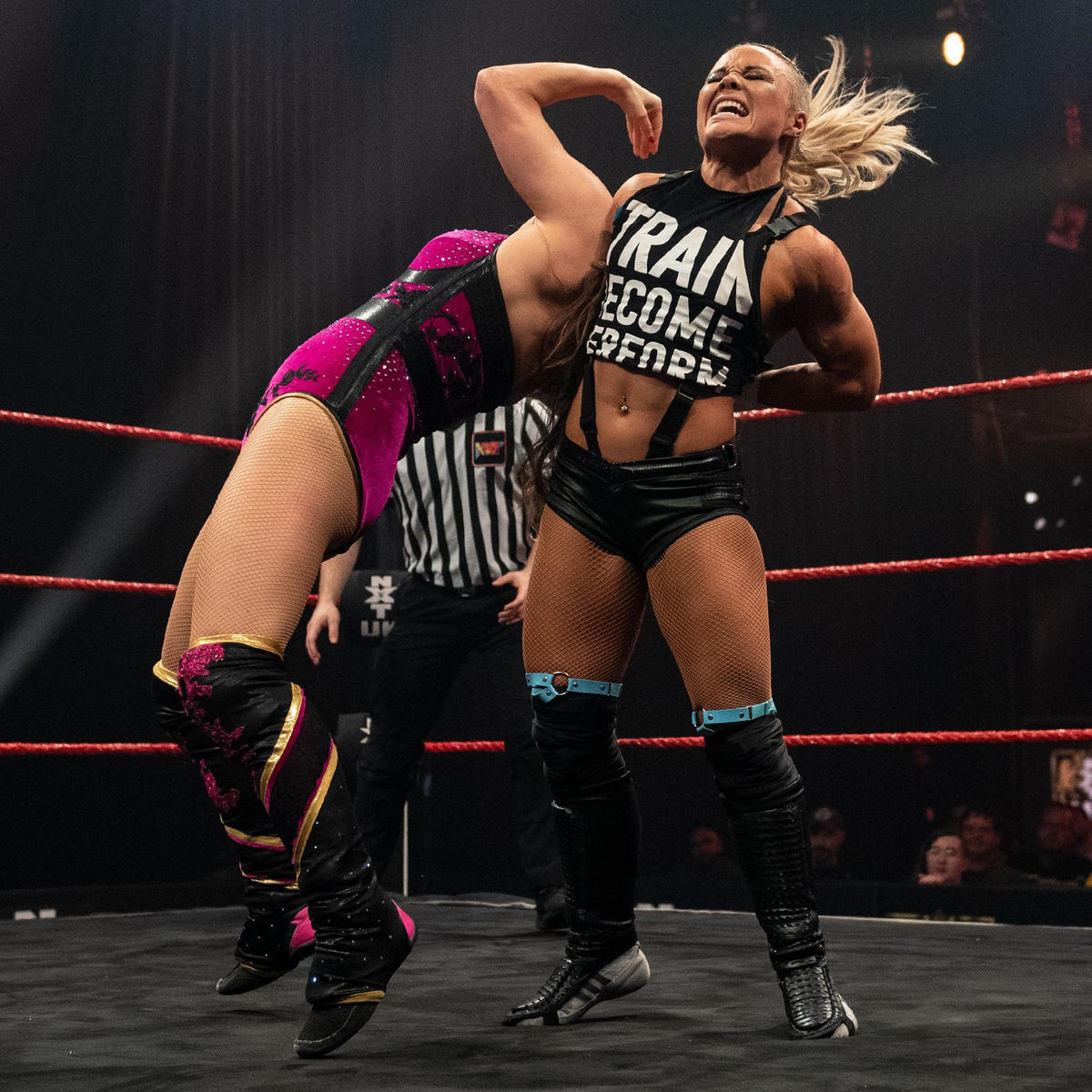 All photos courtesy of WWE.com